A YouTube video has appeared online to show a mash up of the recent dumped Pepsi advert, with an added They Live subliminal message about Consuming. 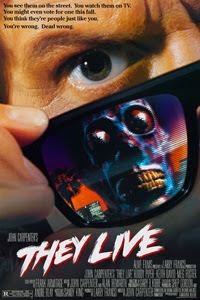 The only thing to unite the Republicans and the Democrats apart from a bombing campaign in Syria is the recent demeaning advertising campaign from Pepsi. A campaign so insulting that to solve and cure all the world's woes is an ice cold Pepsi. In the advert we see Kendall Jenner in a modelling photo shoot, whilst outside is a demo going on about Love, or something like that as it so vague. She abandons her shoot to join the demo, with a line of intimidating police officers, ready to beat the protesters, she then gives a cop a Pepsi and everything is right in the world. Well the advertising campaign has been pulled never to see the light of day, or has It? A YouTube video has appeared, an anti capitalistic video using the aliens from They Live in a video about Consuming, and hidden subliminal messages.  The video is amazing only a few seconds long, but is a fantastic video about corporate advertising, have a look for yourselves.