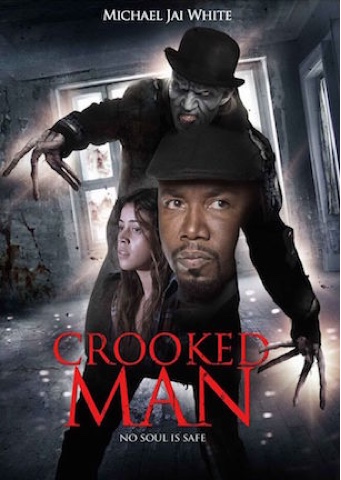 There was a crooked Man  and he walked a crooked mile. He found a crooked sixpence  upon a crooked stile. He bought a crooked cat, which caught a crooked mouse, And they all lived together in a little crooked house.
This 2016 film based on the old saying above, the bogeyman who appears if it is sang out loud, this SYFY TV movie is all I can say is definitely a poor mans Babadook, a film without any scares, tension, and every scare is just about borrowed from the film Lights Out with the Crooked Man always in darkness.
With terrible acting to boot, and a dismal script, the film is dreadful I'm afraid, such a shame as it could have been a very good movie, if it had just learnt a few things from Jennifer Kent's The Babadook, as the Crooked Man is quite a good character, who moves in that disturbing flickering type of way, with the clicking of bones as he moves. The whole thing about him using the darkness to hide is not always utilised, and he is seen far too many times, with no usual bogeyman type scaring, and playing with his victims, which could have made this movie better. The reason The Ring is so scary is because of the tension Samara teases and scares its victims for seven days after the tape has been seen, then crawling out of the TV screen to claim her victim. In The Crooked Man we have zero tension, he just turns up in the dark and kills its victim, then disappears. Such a shame as this movie has potential, and I'm still betting numerous sequels will be made of this film, even though it is a poor film, unfortunately The Crooked Man himself is quite a scary entity, and their is no doubt we will see him again. A very poor movie, dreadfully acted, very poor script, that could have been so much more.
1/5⭐️
Plot summary;
A girls 13th birthday sleepover with friends, is ruined when they watch an online video of this myth, and the song is sang. Later the Crooked Man appears and kills one of the girls, Olivia Shaw, one of the girls friends is found over her dead body holding a bloody knife saying " The Crooked Man did it". She then serves six years in a mental asylum before being released. Whilst her old friends have grown up, and refuses to see her after her release, it seems Olivia released so is The Crooked Man who is determined to kill everyone who was at that sleepover that fateful night.