Kong Skull Island has a deliberate reference to Cannibal Holocaust, and has been confirmed by director Jordan Vogt-Roberts.

How can Kong Skull island a PG13 film have a gruesome nod to Caniball Holacaust, and it's not blood thirsty natives on the island, but a very clever blink and you miss it scene with a giant spider attack. Whilst the massive spiders attack and Inpales a poor soul from his throat and all through his body, with one of his spiky legs.  It was hinted that the nod was to Canibal Holocaust, and it turns out to be true that Director Jordan Vogt- Roberts is a genuine horror fan and the scene was deliberate, which is very clever to add something so gruesome into a PG13 film, although not a naked woman impaled but, still a gruesome blink and you miss it scene in a film that pushes the violence boundaries in a PG13 movie.
I have not had the pleasure in seeing this movie but my good friend and work colleague had seen it and did say it was far better and action packed than the 2005 Peter Jackson's overlong effort.
Director: Jordan Vogt-Roberts
Writer: Dan Gilroy, Max Borenstein
Starring: John Goodman, John C. Reilly, Samuel L Jackson Brie Larson, Tom Hiddleston
Release date: Friday, March 10, 2017. 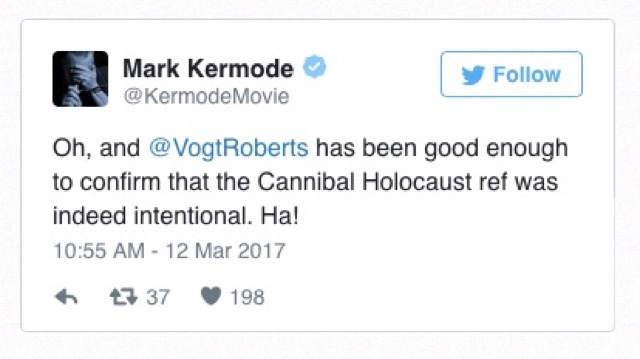