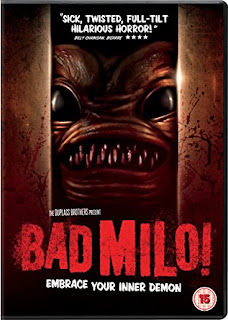 They say Stress is the second biggest killer, well imagine having a lifetime of pent up stress and
anxiety,that we all need to let out our inner demon,well imagine if that demon actually does eventually get out,and will kill anything or anyone personally causing you that stress. That is what Bad Milo is all about.

Plot summary:
Duncan is that type of guy,always trying to please everyone,but is constantly put down,taken for granted,the butt of many a joke,always under stress,with little or no reward at all. Constantly on the loo,with severe abdominal pain,whilst going,until one day the pain is so bad he passes out,only to wake the next day,and find out his co worker has been attacked by what seems to be a vicious animal attack.
It seems the inner demon Duncan has been keeping inside,has finally decided to come out,and has been living in his lower bowel,and appears from his anus to take out any stress and deal with it,that poor Duncan is suffering from.

Yes this film is a gross out Horror comedy,with the usual fart,ass and shit jokes,with Milo appearing one time covered in poop,and shaking himself like a dog to shake of the excrement over Duncan. It is incredibly bloody also, with some great kills from Milo,in one scene biting of a mans penis,who is constantly putting Duncan down,over his manhood.

It is a strange film that a killer demon coming out of someone's rectum, can actually be quite cute and loving,whilst he is not baiting for blood. It is genuine film,with a lot of heart,covering abandonment issues,and the terrible stresses we all have to deal with on a day to day basis. Honestly apart from the excessive violence it really is a great film,really funny,very bloody,everything a horror comedy should be. With brilliant performances from Ken Marino as Duncan, Peter Stormare as a therapist who Duncan sees,who tells Duncan to love his inner demon. With a great cameo from Patrick Warburton as Duncan's boss,who is currently running the company into the ground,with Duncan about to take the rap for everything.

A very clever funny film about life,and What if you have that chance to right all the wrongs in your life,we could all do with a little Milo in our lives.
4/5☆☆☆☆ 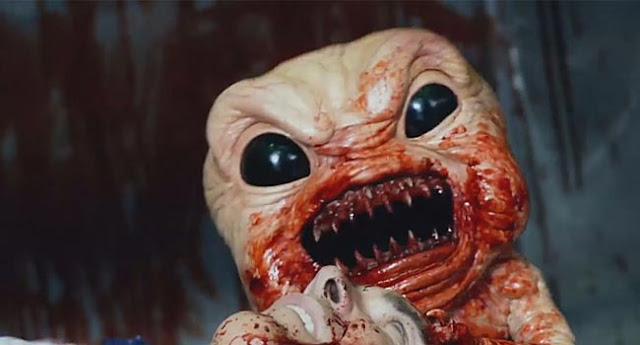