Enemy Mine finally gets a HI-def release, "and about time" this great film believe it or not is celebrating its 30th anniversary, lovingly restored by Eureka Entertainment. 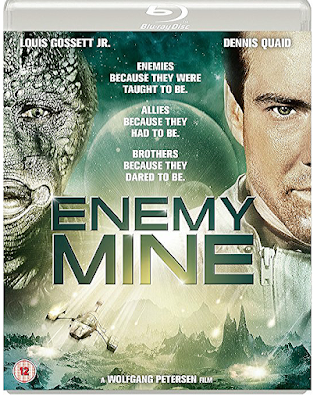 Although not a horror release it is still a great sci fi movie, and apart from Inner Space and D.O.A this was Dennis Quaids best work.
With an onform Lois Gossett Jr who is unrecognizable in prosthetic make-up. Directed by Wolfgang Peterson of Das Boot fame, a story of two sworn enemies who happen to crash land on an alien planet, first with a battle of wills and aggression, following an unlikely bond and friendship, with Dennis Quaid realising the true enemy is the Human Race not the aliens he was trained to hate.
Although a 15 certificate in the eighties it has now been degraded to a 12 certificate, getting its debut on Bluray with this being the 30th anniversary edition.
I loved the eighties and it is still my favourite decade in film making and movies, and with this Fright Night, Highlander all released this week, and all celebrating over 30 years, it is a great week for nostalgia, and a great week for some damm fine releases.

Although a bare bones disk with very little features, shame as it is a great film, it is great to see it released on hi def especially in the UK.

Currently £10,00 in Sainsburys and that is the cheapest I have seen this movie, rated 12 directed by Wolfgang Peterson, distribution by Eureka Entertainment, available from 27th March 2017.