Santa Clarita Diet, currently showing exclusively on Netflix, a brilliantly funny gruesome comedy, that gives a lighter touch to the Zombie TV shows, and is an ideal family alternative to the Walking Dead. Ten episodes all available from 3rd February 2017. 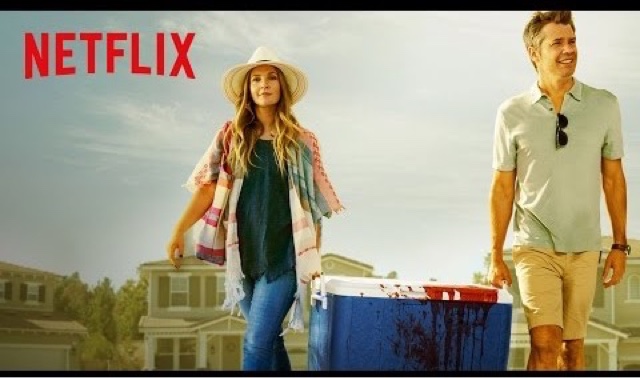 After finishing a night shift early Saturday Morning, browsing through Netflix before I went to bed I came across this, I thought a rom com, with blood, murder about two realtors in Santa Clarita, maybe about a serial killing couple, how wrong I was and how great this series is. Before I knew 4 episodes had passed, a Zom Com you can call it, that is actually incredibly funny, brutal and bloody, with two stars who are perfect onscreen the always watchable and reliable Drew Barrymore, and Timothy Olyphant as the married realtors, who are desperate to hide the fact that one of them has become the undead, with a taste for human blood and flesh. Doing what married couples do, argue a lot, but secretly deeply in love with each other, and will support each other through this strange time. Unlike other Zombie programs Drew Barrymore keeps her humanity, and certainly does not want to eat her family, but decides apon a code to only eat people who deserve to die, like a known sex offender who moves into the neighbourhood, whilst being blackmailed by their cop next door neighbor who is on to them, and will not bring them in unless she eats a lot of bad guys needing dispatching. Eventually being more feral and unable to control her eating urges, and body parts falling off, being dead isn't that perfect anymore.
With a lot of blood in the first two episodes it does become less bloody, but still is hilarious, with great acting and chemistry between Barrymore and Olyphant, we have a 10 episode run, of complete guilty mayhem of laughs, murder, canablism, and the best TV show I have seen in a while. Episode listings are as follows, each episode approximately 28 minutes although the final episode is disappointing, at least another season is being considered, as we are left on quite a downer, to what is a great series, that is so much better than I Zombie.
1 "So Then a Bat or a Monkey" 4/5⭐️⭐️⭐️⭐️
2 "We Can't Kill People!" 4/5⭐️⭐️⭐️⭐️
3 "We Can Kill People" 3/5⭐️⭐️⭐️
4 "The Farting Sex Tourist" 3/5⭐️⭐️⭐️
5 "Man Eat Man" 3/5⭐️⭐️⭐️
6 "Attention to Detail" 2/5⭐️⭐️
7 "Strange or Just Inconsiderate?" 4/5⭐️⭐️⭐️⭐️
8 "How Much Vomit?" 4/5⭐️⭐️⭐️⭐️
9 "The Book!" 3/5⭐️⭐️⭐️
10 "Baka, Bile and Baseball Bats" 2/5⭐️⭐️