An accidental discovery that turned out to be quite decent, shame it failed, but the prequel to Bluray which was Superbit.

I'm writing this as I came across these titles by accident, buying a copy of Bram Stoker's Dracula second hand for less than a pound, and the copy I received was the above Superbit version.
So I did some resaearch about Superbit that in the UK completely passed me by, it was also around the time my daughter was born, so through work, lack of sleep, and being a new parent, this format completely went unnoticed. Shame as I have collected every format going over the years such as Betamax, VHS, Laserdisc, DVD, HD/DVD and finally Bluray, and knowing about it I would have Collected the format. What was Superbit you ask, like HD/DVD the forgotten format, but unlike Bluray that eventually won the format war, especially for Sony, it was Sony's brainchild before Hi-DEF finally took off to enhance the standard format which was DVD, and by doing that they took the decision to loose all special features, and fancy menus on DVD disks which took up half of the 4gb storage, with the film compressed onto the final part of the disk.
By removing all the fancy features and menus, audio commentary, they could improve the bit rate of the film, and use the entire space just for the feature film, and have proper DTS coding for sound.
Unfortunately with an inflated price tag, for just a little difference in picture quality, maybe just two times, people were happy with the 480i format of DVD, which finally convinced people to give up on VHS for better picture quality. 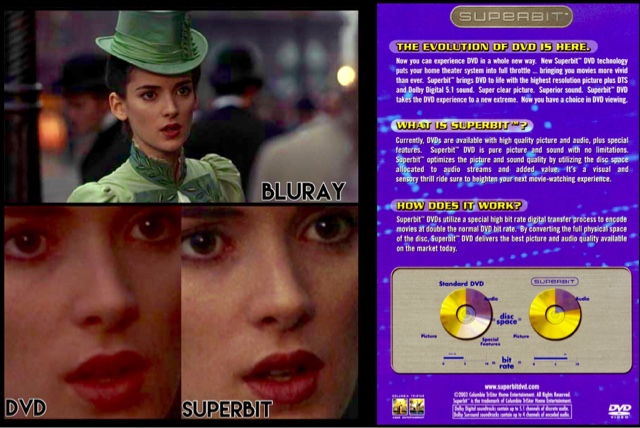 Above is the technology explained on the right, and a quick picture showing the three formats on the left, as you can see the first picture is from the Bluray version of the film, the picture to the far left is standard  DVD, then next to that is the Superbit version, and although not in the same league as Bluray, but you can certainly see definition on Wyonna Rider's face, especially around the nose, and even freckles, the lips are more defined also. Considering you can pick up these titles on EBay and Amazon for just a few pounds, even brand new, they certainly are a cheaper alternative to Bluray, and upscaled on a decent Bluray player Dracula picture quality is brilliant, not Bluray quality but a dam sight better than standard DVD.
A format that unfortunately finished production in 2005, which led Sony to concentrate on Bluray technology, it is a shame Superbit died, as it could have been a great alternative to Bluray, with a slightly different price tag, instead of giving multi format disks in DVD and Bluray combos put in a Superbit DVD you could have had two disks of the same film but on two great formats for picture quality, and sound, one maybe for home use eg Bluray, and one disk for DVD on the go, but not failing on picture quality.
It is unfortunate that Superbit is now dead, but it was an idea for about three years that could have nearly worked.