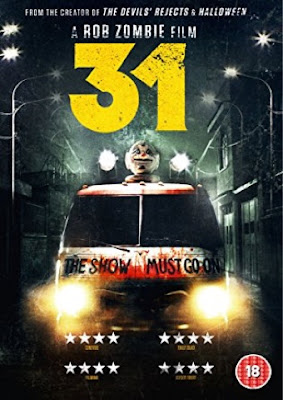 Plot Summary;A bunch of Carnival folk in the late Seventies traveling across America, are taken hostage mid journey, by three sadistic,  geriatric, Elizabethan dressed idiots, who like to play a game called 31, in which the only rule of the game is to survive for twelve hours, in this industrial maze of factory units, whilst be chased and hunted down by various assailants.

Rob Zombie clearly loves the horror genre, but he is not that good at it, he has great ideas, but somehow fails on every film he makes and produces, yes gore and being sickened by it, is what most people want, I get that, but sometimes in films less is more, you can create tension, without having to resort to gore all the time. It  is this approach that is making him predictable now, I almost knew how this film would play out from the start, and I was right second guessing it all the way through.
It is violent, it is a survival type horror, it has Roddy McDowell in it, with his scenes probably filmed in a day, Richard Blake is amazing in this, and is the only genuinely terrifying character, the rest of the film is forgettable, offering absolutely nothing new to the horror genre, with Zombie's insistence of including his wife in every film is also another low point, proving nepotism in the workplace is rife especially in Hollywood, the whole leading lady thing does not work, shame as this could have been a decent movie without her, as the supporting cast is excellent.
The DVD is disappointingly without any features at all which featured on the US version, proving region 2 Europe has the inferior versions of films, sacrificing special features for subtitles is unfortunately the reason why.
2/5**