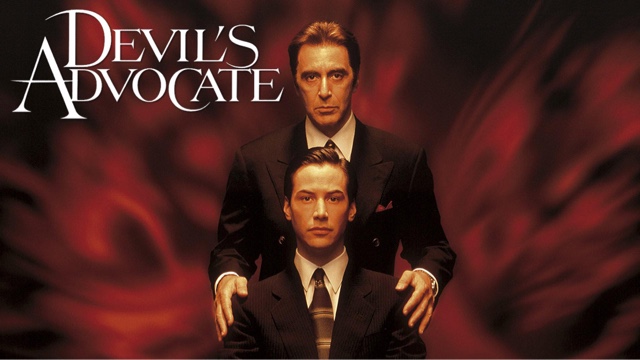 I came across this the other day clearing out a cupboard, well cleaning I was really looking for something, as I recently gone retro and purchased myself a working VCR, to go with my Laserdisc player, in my spare room, or I'm calling it my retro room, alongside my PS2 and Nintendo SNES, still looking for a decent working Megadrive, anyhow I came across this, in a limited edition VCR boxset, with a film stills, a copy of the original book, and obviously the VCR and I watched it for old times sake the other day. Apart from the grainy images, which to be honest I like, and the reason I'm going backwards with film quality, I forgot what a great film this was, and being almost 19 years young how good it was, from the direction from Taylor Hackford, the visuals, the outstanding performance of Al Pacino, even the wooden Keanu Reeves was half decent in this, and will say it is in my top 5 Keanu Reeves performances, with Speed, The Matrix, Constantine and John Wick my only other notable mentions. A simple story that looking back on with an older head realised what the actual movie was really about, and that was free will, with us all having it, some choosing to use it wisely, some choosing very bad choices, and like this film using the Devil to tempt you into making the wrong choices, subtlety nudging you to the darkness without you realising it untill too late. A film about power, not so much greed, like Wall Street, but a film about power in the form of an ego, the power of being unbeatable, the power of winning and the feeling that brings to your ego and self esteem. With Keanu Reeves character once being a Prosecution Lawyer , but turning into a Defence Lawyer instead, defending unscrupulous clients, with a 100% win record, comes down to making one choice, like before mentioned the free will, when defending a sex offender, who knowingly abused a young girl, and knowing his clients guilt can he defend him, or refuse.
I never got the ending of this movie before, and was always disappointed by it, but watching it with an older head I got it, and realised it was actually very clever, to see a man and his vain ego, make a choice of going down the Darkside, or by doing the right thing, and possibly destroy his great career in the process by doing the right thing is a very good ending to a movie. Proving both the Devil and God has a part in your life always, but using your own free will, choose which side or which one you want to listen to, making this one of the best movies about the Devil, and his very clever way of manipulation of your soul.
With some fantastic performances from the very youthful Charlize Theron being just 22 in this movie, even Keanu Reeves was actually great in this movie, and between them having great chemistry, but the outstanding performance has to go to the scene stealing Al Pacino, in a film performance that I thought  was better than Scent Of A Woman in which he won an Oscar for, but I suppose being a horror type movie, it passed through the Oscar voting board very quickly, the fact that Keanu Reeves was in it, with some dreadful 90's movies behind him in Walk In The Clouds, Bram Stokers Dracula, Johnny Mnemonic, Chain Reaction, apart from Speed, reinventing his career, and The Matrix in 1999 the one role he will always be famous for.
The Devils Advocate is really a good film, scary in places, but terrifying about the possible choices we all make in life, with a top performance from Al Pacino, I would say this is in my top 10 easily of nineties movies, a quite brilliant movie.
4/5⭐️⭐️⭐️⭐️