On this day 20th November 1998 this groundbreaking and controversial film was released. American History X 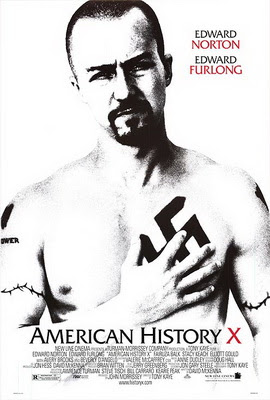 This brilliant movie was released on this day 18 years ago, and apart from Fight Club is one of  Edward Norton's best movies. Directed by Tony Kaye, and written by David McKenna, and the warning of extreme racism, and proving that racism usually and always starts in the home environment. Being brought up by racist parents, Derick (Edward Norton) and his younger and impressionable brother Danny (Edward Furlong) have to listen to rants of their father who is loosing his job to a black worker, because his job position needs to be more diverse. When Derick's father is killed in a drug accident, whilst attending a fire at a local drugs den, his fireman dad is killed unfortunately by a black dealer, and sets Derick on the road to full on racism, joining a Neo Nazi gang, intent on causing mayhem, and assaulting other minorities including, black shop workers, Korean and Chinese business owners. Until his arrest for killing two black men stealing his car. Serving three years in prison, that is a hard watch, as he is ganged raped by the same Neo Nazi's, his so called friends,  and becomes close friends with a fellow black prisoner, showing him it is not about race and skin colour but about us being all the same, one race,  the human race. A lesson he is desperately trying to stop his younger brother going down the same route he did. By his redemption that he will turn against the fascists that are desperate to brain wash his younger brother. As I said a brave film about racism, that proving even now has not gone away especially in America at the moment. With the arrival of a new President, who even the KKK and even Neo Nazi groups giving him their support, and racist slogans appearing on walls in schools, and black students being called cotton pickers is extremely unnerving at the moment. It is shocking that even now in 2016, the racial tensions in America is as strong now as it was 18 years ago when this movie first came out.