On this day 1st November respectively these two movies were released, A Nightmare On Elm Street Freddy's Revenge 1985, 28 Days Later 2002. 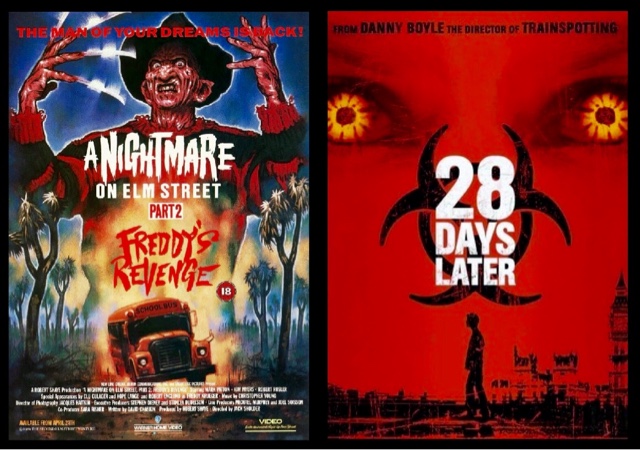 Yes Freddy was back in 1985, not with Wes Craven involved, but directed by Jack Sholder, still produced by Robert Shaye, and I actually owned that movie poster above, in which I blagged from the video store owner the promotional poster, a film that was actually called the gayest horror movie made. With a star that has distanced himself from the movie, being openly gay at the time, saying he was embarrassed by the whole involvement of this movie. With open gay references that were denied by the screen writer at the time, but admitted recently the images, and screenplay was intensional with its gay references.
A film in which Freddy didn't just haunt the dreams of teenagers, but actually wanting to posses them in the form of Jessie, and wanting to be inside him, now do you get the references,  the new boy living in that infamous house on Elm Street. With the great special effect of Freddy arriving from the stomach of Jessie, and gate crashing a party of teenagers, in the real world, slaying and killing them all saying" you are all my children now". This took the film in a different direction, in which I liked at the time, but didn't notice the blatant homosexual references until I was much older to understand, did this ruin the film, hell no !!!  I still think this is a decent movie, others didn't and still don't, others prefer the way future films played out, with Freddy and the comedy element thrown in. Well Freddy's Revenge was certainly no comedy, it was a decent sequel, that was far better than The Dream Child, and Freddy's Dead.
Also released on this day was Danny Boyle's 28 Days Later, his apocalyptic view of London, after a man made virus is released onto the unknowing public, called "rage" that infects within seconds of contact with the affected blood. An intelligent Zombie movie, which without this movie, The Walking Dead would've never been made. With a director who was at the top of his game, yes he got the Oscar for Slumdog Millionaire, but this I believe is his greatest movie, followed second and thirdly by Trainspoting and Shallow Grave. Shot using handheld HD cameras, and a first for that period, giving a realistic,gritty and in your face look at the infected, was truly terrifying. A classic movie, that still holds up now almost 15 years later. 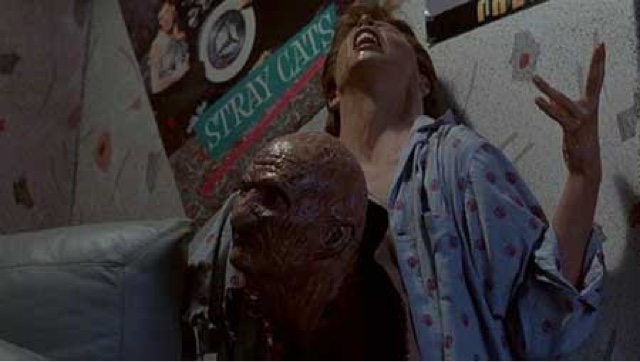