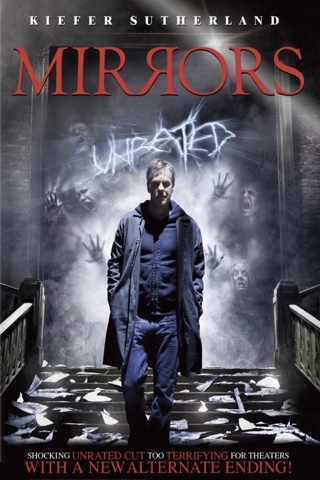 This film has been on my radar for years, but always seeming to pass me by, the second American feature for Alexandre Aja with The Hills Have Eyes remake being his first, starring the always reliable Kiefer Sutherland, with great kills all seen on YouTube I gave this a watch the other day, and....... I was a little underwhelmed by the whole film.
A film that I thought was incredibly slow, yes some scenes are very unsettling, but it is a slow mover, that plods along, with Kiefer seeming bored with the whole idea, and just made it to take a break from 24, Paula Patton, as his ex wife in this, is underused, miscast, shame as she has been in great films, and the young lad who normally stars in the Disney Chanel's Jessie, is probably the best thing in this.
Plot summary;
A disgraced cop takes a security guard job, to look after a derelict shop, that had recently been burned through arson. Whilst on the night shift the mirrors play tricks with his mind, as he questions his sanity, and do all mirrors carry a curse, that will ultimately lead to the death of himself or his family.
Some of the scenes are unsettling, with easiest the best scene with Amy Adams in the bathroom, which is shocking, gory and very bloody,  but the rest of the film using the tried formula of dark spaces, noises, and jump scares, didn't make this film remotely scary, if you want chills, with a film being held by just one actor watch Last Shift (2015) which is actually terrifying, Mirrors is just plain average I'm afraid, with actors that actually seem bored, and not wanting to be in this movie. This is such a shame, as it could have been a great film, and probably could have worked with unknown actors. But proving once again big budget, and big stars does not always make a great movie, even when a talented director is involved, a very average film, saved by one great scene, otherwise this film would have been completely forgettable, the DVD and Bluray Special Features: are;
Anna Esseker Backstory featurette (Blu-ray exclusive)
BonusView Mode: Mirror Images: picture-in-picture commentary and Scene to Storyboard comparison (Blu-ray exclusive)
Animated Storyboard Sequence (Blu-ray exclusive)
Reflections: The Making-of Mirrors featurette
Behind the Mirror featurette
Deleted scenes including an alternate ending with optional commentary by director Alexandre Aja
Digital copy.
2/5⭐️⭐️