A very Sad day for America today, and these films becoming scarily real. Why do Hollywood have a way of predicting future events. 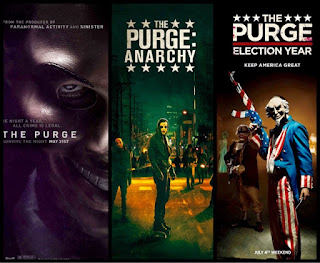 How scary and realistic do these films feel today, after that election result. How do Hollywood have a way of predicting the future, Trump's name was mentioned in Back To The Future 2, predicted in The Simpsons, and if you follow the story in these films, after years of political unrest voters feeling like they have no voice The Founding Fathers appear, to give all the right to bear arms once more, as long as it is only on one night Purge night. When that angry man or woman can take all their frustrations and anger out on that one night, and hide the true reason behind it all to kill minorities, the poor, the impoverished and sick in society who cannot afford health care. How scary is it to be American at the moment with the man they have just elected, is so very close to the ideals of The Founding Fathers, wanting to abolish an affordable health care, wanting to create divisions between races, and to encourage the Second Amendment the right to bear arms, will give every conservative white man in America thinking it is his constitutional right to carry a weapon everywhere, oh my god what have you done!!! a very scary time to be living in that country at the moment.