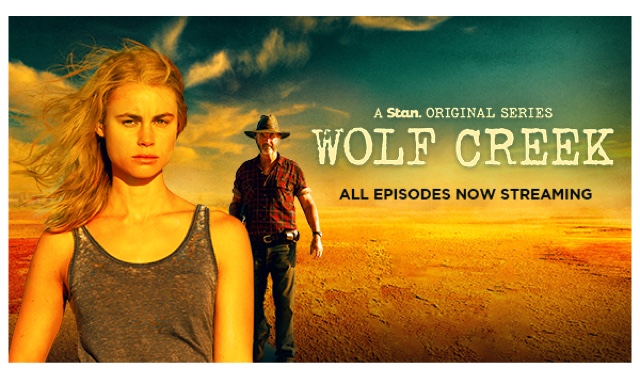 Wolf Creek from Stan, an exclusive streaming service for Australia, their equivalent to Netflix, has finally hit our home video Screens, and available to buy or stream this week. With a brief blink and you miss it showing on Fox UK. Will it finally flesh out the character Mick Taylor, played menacing and terrifying by John Garrat, with a six episode run of 47 minute episodes. With a savage opening episode, can it maintain your attention for another almost four hours, well I will let you know.
Plot summary;
Eve and her family are on vacation, traveling across the outback, its her Dad's dream to do so, with a chance encounter of a crocodile attack on her younger brother, rescued by Mick Taylor, the family thank him with a beer and barbecue. The thing is Mick is inhospitable, and savagely murders the family,including Eve, but believing her to have drowned in the attack,he hides the evidence, moves on, to have Eve found still alive after her gunshot wound.
Knowing the police are onto a looser, trying to locate this man,across the vast land of the outback, she is determined, as a one woman vigilante to locate Mick Taylor, and deliver her justice.
With three multiple story narratives keeping you enthralled throughout the the four and a half hour running time, mostly every episode featuring Eve who is acted amazingly  by Lucy Fry, who previously played Lee Harvey Ozwalds wife in the mini series 22.11.63. She is beyond brilliant in this, playing a young woman sided with so much grief through losing her family to psycopath  Mick Taylor, to her stubborn determination to locate him and kill him, whilst evading the local police, and a hardy detective, who understands her plight, and is more concerned about her welfare, rather than her vigilante nature. Mick Taylor, who through local knowledge is aware a young woman is looking for him, and maybe the woman he left for dead, with a biker gang after Eve also, as she steels from them to fund her revenge mission. All these story arks intertwine into this short running time, with so much fit into every episode, and fleshing out more the desolation of the outback, and to what attracts so many tourists, to this unforgiving landscape.
First I will run through the positives of this series;
The acting is brilliant throughout proving what talent Australia has when it comes to acting.
The direction and tight script keeps you enthralled every episode.
The cinematography of the Australian outback, especially in Hi-def is nothing short of amazing, showing what a huge and vast area it is.
Eve is such a great character creation, and proves an equal to Mick Taylor.
The negatives;
Every male character in this is shown to be a sexist predator of woman, and a potential rapist, which would be very annoying if I was watching this as an Australian man, as all men are clearly not like this, it is only the second movie I have seen showing men in such a bad light with Michael Winner's Dirty Weekend from 1993 hinting that all men are like this, which is clearly not the case.
Mick Taylor is seen as a supporting character, in this, and is clearly not the main character.
Apart from the opening episode, every kill by Mick Taylor is seen with a cutaway scene, almost like the series makers are wimping out, or following strict violence guidelines for TV.
Eve can suddenly survive a life threatening injury, in which she is seen bleeding from her wound frequently in the first episode, to have her jumping, crawling through windows, in the second episode.
The same annoying thing when she steps on a bear trap in episode two, clearly puncturing her foot, and by episode three the limp has completely gone.
Mick Taylor although still menacing, keeps the humour that was so frequent in Wolf Creek 2, and not as terrifying as the first Wolf Creek, in which this story is more based on.
This series is very good, but it should have been great, the acting is impressive throughout, the direction, the script, the cinematography is gorgeous, but little things in this stops it from being great, as it seems so real from all other aspects, but not from the point of view of Eve, who seems to be impervious to pain, considering her character early on is addicted to pain killers, somehow manages to go completely cold turkey, and not need them at all later on. This small part spoilt what was a good mini- series, my only conclusion could be to describe that her grief, and revenge is so great, that she manages to get through all this pain, because of this determined retribution.
A still very good mini-series, that didn't flesh out Mick Taylor like I thought it would, but is still a good revenge story.
3/5⭐️⭐️⭐️ 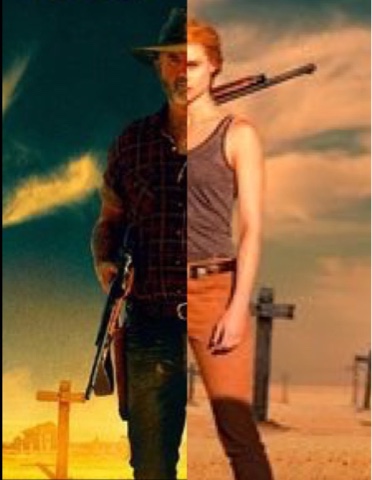