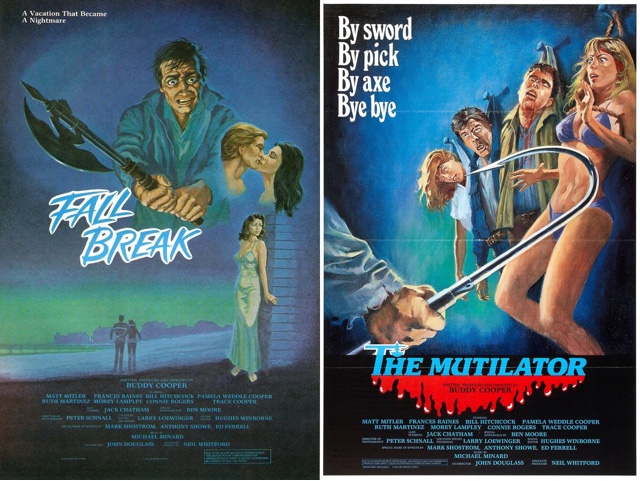 The Mutilator or previously known as Fall Break, with the great opening song of the same name, that will seriously get into your head, came out in 1984, after a market of saturated slasher titles, since the massive success of Friday The 13th all horror films around that time followed the slasher format, with a lot of titles seemingly morphing into other titles, this movie became a cult favourite, due to the ingenuity  of the kills, and gore scenes in this movie, not from Tom Salvini this time but Mark Shostrum the fx wizard behind the gross visuals from Videodrone, and Evil Dead 2. Released for the Bluray treatment from the awesome Arrow Films once more, a company, like 88 Films who in the UK really hold these films to their hearts, and create with love some great titles, with ace collectable sleaves.
Plot Summary;
After the accidental shooting of his mother years previously, a college lad gets a message from his Dad to lock up the family cabin for the Fall, thinking this will be a great excuse for partying, sexual encounters with the ladies, with his other buddies, only a killer is about to ruin their Fall Break, with some ingenious kill scenes.
In all fairness this movie offers nothing new to the horror genre, yes the kills are very good, the naked ladies are very nice to look at, the girl in the pool scene has a great body, but the movie is still very average indeed, with Friday The 13th (1980) still my favourite slasher movie of that decade, but for nostalgic reasons, and a great reversible artwork from Arror Films, still makes this movie worth owning in your collection with a brand new 2K restoration of the unrated version from original vault materials.
High Definition Blu-ray (1080p) and Standard Definition DVD presentation.
Original mono 1.0 audio (uncompressed PCM on the Blu-ray.
Optional English subtitles for the deaf and hard of hearing.
Introduction to the film with writer-director Buddy Cooper and assistant special make-up effects.artist/assistant editor Edmund Ferrell
Audio Commentary with Cooper, Ferrell, co-director John Douglass and star Matt Mitler.
Audio Commentary with Buddy Cooper and star Ruth Martinez Tutterow.
Fall Breakers: The Story of The Mutilator brand new feature-length documentary on the making of the splatter classic featuring interviews with Cooper, Douglass, Ferrell, Mitler, actors Bill Hitchcock, Jack Chatham and more.
Mutilator Memories special make-up effects artist Mark Shostrom looks back at one of his earliest projects.
Tunes for the Dunes composer Michael Minard reveals how The Mutilator s unique score was created.
Behind-the-Scenes Reel.
Screen Tests.
Alternate Opening Titles.
Trailers and TV Spots.
Fall Break Theme Song (Original and Instrumental Versions).
Opening Sequence Storyboards.
Motion Stills Gallery.
Original Fall Break Screenplay (BD/DVD-ROM content).
Reversible sleeve featuring two original artworks.
Region: Free.
3/5⭐️⭐️⭐️ 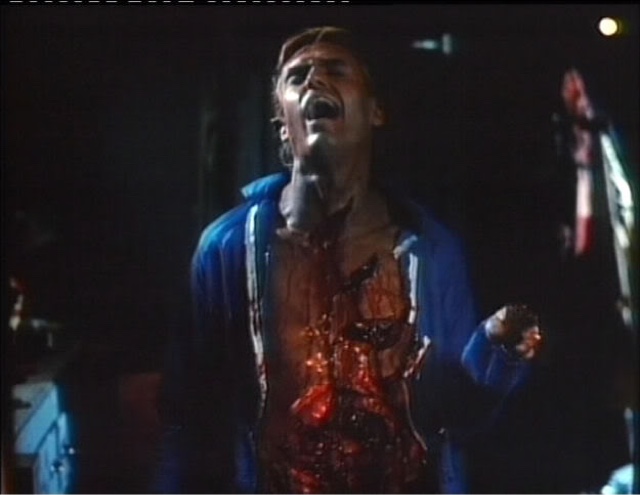