On this day in 1987 this underrated film was released. 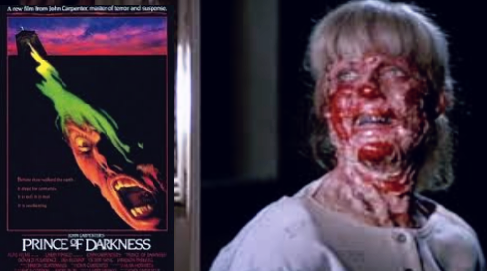 This film was released on this date in 1987, one of John Carpenter's underrated films, hated by all critics at the time, with a confusing storyline, about the essence of Satan being found in the basement of a New York church, in a glass container containing green liquid that possesses people.
I did like this movie, yes he followed with probably his most iconic films, They Live, a year later, but to have one film that wasn't quite up to his normal standards, can be forgiven, considering the films he did make in the eighties namely The Thing, Escape From New York, The Fog, Christine, Big Trouble In Little China, and Starman,  yes the guy was on fire in this decade.

Part of his apocalyptic trilogy with The Thing being first, then this, Prince Of Darkness, his final film of this trilogy  was In The Mouth Of Madness, which was probably the best horror movie made in the nineties, and unfortunately not available as dvd or Bluray release for the UK.