With news that this film, the best from the original V.H.S. segment  Amateur  Night will have it's own feature length film named Siren, released on V.O.D on the 6th December, is great news, with a limited theatrical  run on the 2nd December.
Reprising her role once more is Hannah Fierman as Lily, with Chase Williamson, Justin Welborn, Michael Aaron Milligan, Randy McDowell, to name some of the cast members, so judging by the number of male cast members, Lily will be using her predatory instincts again to prey on young men. Directed by Gregg Bishop, who also directed Dante The Great from V.H.S. Viral. With Amateur  Night being described as being " a sketch" with Siren being a fully developed and more fleshed out movie of that segment.With Positive reviews already coming in, I'm looking forward to this movie.

News that the Big Trouble In Little China reboot has been put on the back burner by Fox, already upsetting loyal fans of the great original movie, casting Dwayne (The Rock) Johnson in the role as Jack Burton made famous by Kurt Russell, who's everyday hero was far more believable than Dwayne Johnson could ever be with his hulking frame. With Johnson even suggesting that John Carpenter should direct this remake, with John being his normal quiet self, and saying "he ain't been approached by no one". Although Fox owns the rights to this movie, we can only hope this reboot will never happen, then again with no new ideas coming from Hollywood at the moment, it will eventually go ahead, and I for one will not be in line to watch it. 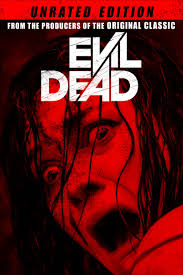 Fede Alvarez's Evil Dead 2013 remake is getting an unrated cut, "not a directors cut" saying the director, just a longer version of his original. With many scenes taken out to move along the running time of the film. With Fede talking on The Shockwaves Podcast for Blumhouse, this is exclusive to the US though, and only on digital format, meaning V.O.D ONLY and on the 25th October, and why only America, well it seems back in 2013 Sony pictures sent the UK the unrated version to begin with, so here in the UK WE HAVE HAD ACCESS TO THE MORE VIOLENT VERSION, whilst the US only had the theatrical cut, so expect 27 differences, 21 extended scenes, 1 additional scene, 5 scenes with alternate footage;
So expect to see a longer version of the Mia tongue cutting sequence, extra pages of the necronomicon being turned, Natalie's infected hand after the bite, more fluid is seen being squeezed out, the extended version then of Natalie cutting off her arm is longer and more gruesome, we see an alternate shot of Mia's bloody stump, near the end,and a longer cut of Mia being found exhausted in the road, being found by an elderly gentleman, who takes her to hospital, she opens her eyes in the back seat, cut to the end. So is it really worth the effort? it is up to you on whether you enjoyed this version of this film, I for one didn't and thought it lost any humour to Sam Raimi's version, and to see the man back to his best, watch the brilliant show on Starz  Ash Vs The Evil Dead, or if you liked the 2013 version, go on UK Amazon and order yourself the UK unrated version, and you will see all the differences yourselves.