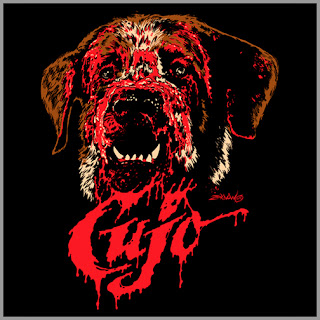 I watched this for the first time this morning,and in all fairness it upset me, I'm a massive lover of Dogs,especially larger Dogs, I even have my own ex racing Greyhound. To see such a lovely normally peaceful Dog that is a St Bernhard,and seeing it turn into a bloody matted mess of a Dog, intent on doing harm to Humans,who normally are saving them is a little strange,and disturbing in its own right.

Based on the Novel by Stephen King of the same name, Directed by Lewis Teague, in 1983.

Plot Summary;
Starring Dee Wallis,a family Woman,who is not so family orientated,as she is unfaithful with the local Handyman,to which her Husband finds out and leaves her to get his head around things.
She is having car trouble, so she takes her crappy car to a local man who lives in the middle of nowhere to get her car fixed with her young 6 year old son. Only this man's Dog "Cujo" who is normally placid,and soppy,a big lump of a softy Dog,has been bitten days before by a possible rabid bat,and is disoriented,angry, frothing at the mouth,and extremely vicious and extremely dangerous. Intent on eating,killing the woman and her son.
That is the film a simple premise,half the film is introducing the characters,then other half is pure terror and suspense, with Dee Wallis such a talented actress,with the best performance going to Danny Pintauro who plays the Son "Tad" with such believability,with absolute terror in some scenes. I have not seen such a great performance from someone so young in years, until I saw The Babadook  With the young Noah Wiseman. I have to admit I was impressed by this film,the terror,the claustrophobic scenes being trapped in a car,with no food or water,with a patient rabid Dog waiting to attack is seriously scary,and disturbing also. For a film that is only 88 minutes long,it fits a lot in,for its short running time. A classic yes I can agree with that, I hated to see a lovely Dog being vicious,but that is the scariest thing about this film,and the dangers of the disease Rabies,that it can turn the normally placid breed of Dog the St Bernhard into a killing beast. A brilliant film.
4/5⭐️⭐️⭐️⭐️ 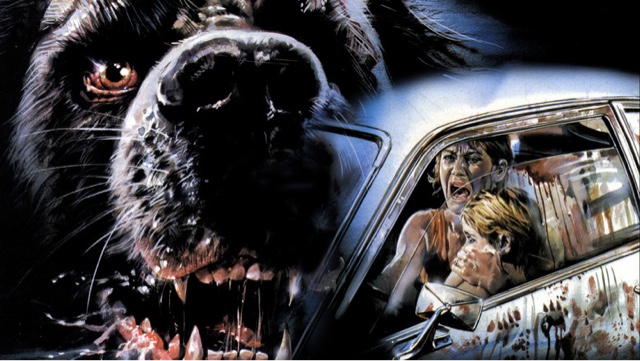