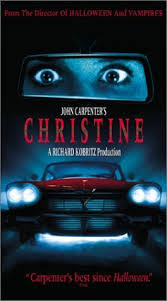 Another John Carpenter classic,my goodness could this guy do no wrong from the golden age of Horror 1983,based on yet another Stephen King Novel, we have Christine. A 1958 Plymouth Fury, a classic car from a classic age waiting for an owner.Arnie Cunningham,a nerdy teenager,only having one true friend,who is very shy and reserved. When he comes across the Plymouth in a poor condition,and dirt cheep,he purchases it with the plan to restore her to her former glory,names her Christine,and hopes to become more popular now he has a car.

Now Arnie seems suddenly more confident,now Christine is in pristine condition,but has a very strange love affair with that Car. The thing is Christine loves him back equally,if anyone hurts Arnie,the car strikes,with people being found dead,with hit and run style injuries. The local police feel Arnie is involved,as his car is seen at the murder scenes,but he is never there as he always has an alibi.

Thing is Arnie finds out Christine is responsible.But the car has almost possessed him,and he cannot let her go. Even when smashed up,Christine has the ability to regenerate,to her perfect self, blood red in colour,the perfect loyal killing machine. That has a hold over Arnie,and will never let him go. A perfect story of a cursed car that possesses any owner that drives her,that will love that owner unconditionally,with loyalty,and will kill anyone who gets in the way of her and her owner.
Although not terribly violent,with very little gore, I think it was only ever a 15 certificate in the Uk,does not stop it from being completely watchable,more of a thriller than balls out Horror,but still a fantastic film,with some great acting, from Harry Dean Stanton,Robert Prosky,Christine Belford,and some great young actors such as Kelly Preston, Alexandra Paul,and a standout from Keith Gordon,as Ernie Cunningham. A return to form for Mr Carpenter and back to his horror roots,as his two previous films being sci-fi based with the Thing,and Escape From New York under his directing belt.
3/5⭐️⭐️⭐️

Christine released for the first time on Bluray in the UK. One of John Carpenter's forgotten movies of the 80's. I have already reviewed this title,and it is one of my 80's favourites. Coming with a load of extras, which for once is a bonus, I do like my special editions,and I do like my extras too. With John Carpenter's films usually all having decent extras, such as Arrow Films Big Trouble In Little China, The Thing was loaded with special features.Here is a run down of all the features on this great edition.