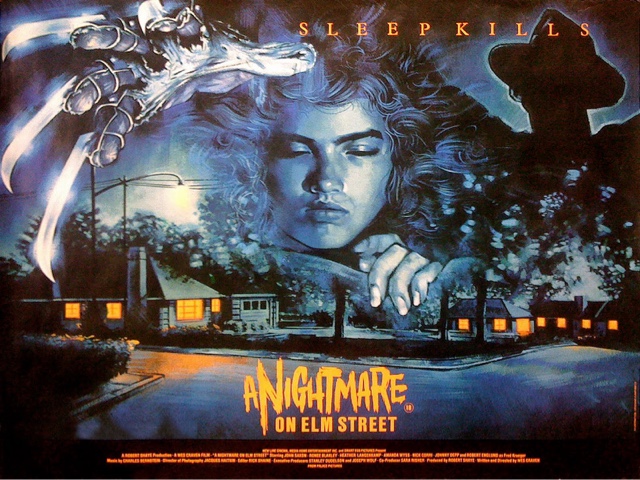 *please note this review was written on the 29th August 2015.
I could not review anymore films yesterday,after finishing work late,then hearing the news about the passing of Wes Craven. I wasn't in the writing frame of mood, but I'm up this morning brain has finally kicked into gear. So I had to write about my love of this film,that came out in 1984.
A film so different to any of the slasher films made previously, a film that made one of the scariest boogeyman onscreen for three Decades now, 'Freddy' a murdered child killer, killed by the vigilante parents on Elm Street,burned alive in the boiler room where he killed. And somehow his vengeful spirit has found a way  to infiltrate the dreams of teenagers of the parents who killed him. Not only giving them Nightmares, but actually able to inflict terrible pain and even death on the youngsters.

A film that put the basic idea of the one thing we all need,the one area of safety we all experience in sleeping, and destroying that notion. A film that took a loveable Alien from a TV series called V and made him the gruesome character we all love today. Robert England is,and will only ever be the Freddy we all know and love. This was the film that introduced us to a young actor called Jonnny Depp, whatever happened to him lol.
With other great casting as Heather Langencamp as the tiltle character Nancy, John Saxton as her Police Chief father, everything about this film is perfect. It did produce another 5 more daft sequels,but can almost be forgiven,as they all starred  Robert England,and the films became all about him and his fantastic protrayal of Freddy  Krueger.

Wes Craven did pull off the genius card again to scare the shit out of us one more time in 1994 when he returned to direct Wes Cravens New Nightmare,a film where he and the original cast members all playing themselves,were terrorised once more,by a more vengeful Freddy, angry at being killed off in the film franchise,and wanting to escape the celluloid world,and enter the real world to kill.
So this is my tribute to this great film,and a plea that hearing the news that another nightmare is about to go into post production, well I ask one question only have Robert in the role,or otherwise out of respect for Wes let the Character Die alongside him also,so the memory of Freddie will,and only be of this film.
Rest In Peace Wes Craven 1939/2015
5/5⭐️⭐️⭐️⭐️⭐️