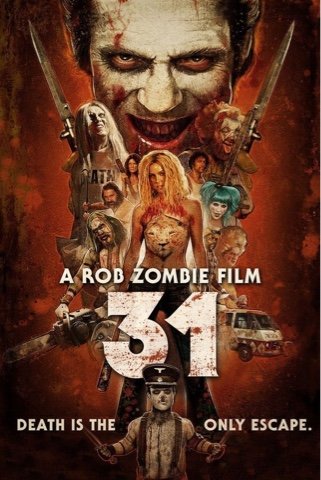 After all the hype, the red band trailer I have now seen this movie, and is it any good? Well it is okay, not a patch on Devils Rejects, or House Of A 1000 Corpses, tons better than Lords Of Salem. I liked his Halloween 2007, but hated Halloween 2, and the one thing that is always apparent in every movie, his wife Sheri Moon Zombie. The worst example of nepotism in the work place, and even more blatant than Will Smith's use of his son Jadyn in most of his movies.Yes I get that they are married, and he loves her very much, and she has an incredible body, but she cannot act, yes later on in the scenes where she is swinging a piece of wood with nails in, or cutting a woman's throat, she plays the part well, but when she actually has to spout dialogue, it is cringeworthy, and I promise you, that the one scene you will be cringing and saying "oh my god no!!!" When she tries to emulate a Jamaican accent, with the black actors present, I would have been so offended.

Plot Summary;
A bunch of Carnival folk in the late Seventies traveling across America, are taken hostage mid journey, by three sadistic,  geriatric, Elizabethan dressed idiots, who like to play a game called 31, in which the only rule of the game is to survive for twelve hours, in this industrial maze of factory units, whilst be chased and hunted down by various assailants.
Honestly I'm not the only person to compare the comparison between this movie and The Running Man, as it is almost identical. Where the hostages are being hunted down, by different assailants, not at the same time, as that would have been to easy, but to have a different killer, each time to be easily taken out by the surviving hostages, I was expecting to see SubZero, Buzzsaw, Dynamo and Captain Freedom, pop up at any minute, instead we have a dwarf Hitler Clown, two clown hillbillies, with chainsaws, a lurch type character wearing goggles and a fucking tu-tu, with a wannabe Harley Quinn as his sidekick.
The thing is the violence side of this movie works, it is full on, in your face brutality, with blood gushing everywhere, with very gruesome death scenes, one in particular, where one of the killers actually fall on their own chainsaw, and then gutting himself, is brilliant. This part Rob Zombie is good at, he knows how to produce gore, he knows what his target audience want, that is full in your face gore style. The thing is, his movies always end up looking like some fancy edited music video, with a director straight out of film school showing off all his tricks. I would have loved to have seen this film directed by Quentin Tarantino, yes he can do gore, but his simple approach to film making, and concentrating more on script and character development, would have made this movie amazing, instead of using handheld camera's with shaky cam, when the action is really happening you cannot decipher what is happening  on screen at that time.
Rob Zombie clearly loves the horror genre, but he is not good at it, he has great ideas, but somehow fails on every film he makes and produces, yes gore and being sickened by it, is what most people want, I get that, but sometimes in films less is more, you can create tension, without having to resort to gore all the time, it is this approach that is making him predictable now, I almost knew how this film would play out from the start, and I was right second guessing it all the way through.
It is violent, it is a survival type horror, it has Roddy McDowell in it, with his scenes probably filmed in a day, Richard Blake is amazing in this, and is the only genuinely terrifying character, the rest of the film is forgettable, offering absolutely nothing new to the horror genre.
2.5/5⭐️⭐️💫 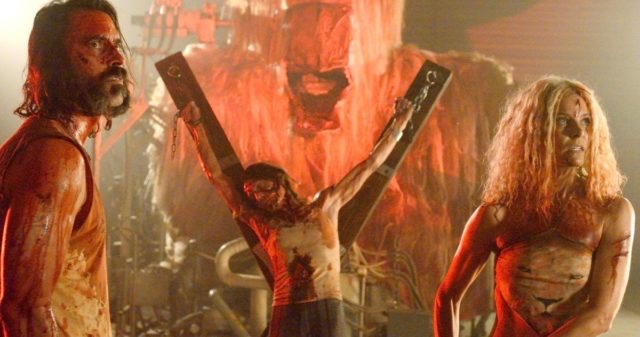