My favourite, and most controversial, scary, or downright so freaky and unnerving music videos, created over the decades. Hope you enjoy. 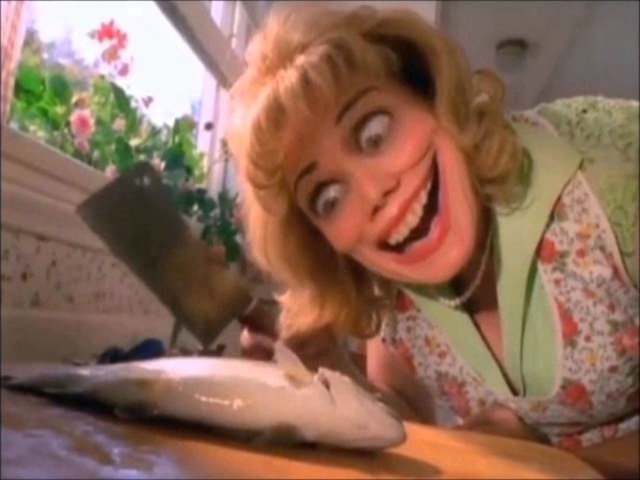 Music videos over the years have been constantly pushing the boundaries, in taste and decency, mostly from the last decade to get as much flesh, booty and titties onscreen, but many artists have also created some very strange, to disturbing video imagery, from the image above from Soundgarden "BlackHoleSun" to Nine Inch Nails, Korn, Slipknot, Rob Zombie, and Marilyn Manson to name a few. I will be running through my favourite music videos, some are metal my favourite type of music but there are some surprises in there too.
Michael Jackson's Thriller.
This was the benchmark for all videos, made famous in the early days of MTV, when they actually played music videos and not reality TV shows. This video, I believe is still one of the most expensive ever made, with a Hollywood budget to boot, and directed by An American Werewolf In London, and Animal House director John Landis. Michael Jackson was always known for pushing boundaries especially in the art of videos, and knew how to sell a song on a strength of that video, not only was Thriller Michael Jackson's second album one of the biggest selling album of all time, it probably had the best music video made, alongside with an almost full length feature film alongside it.

The Prodigy Breathe
From the best selling album The Fat Of The Land, that produced the Singles and videos for Firestarter, Breathe and Smack My Bitch up, with the vary scary, but in real life a very nice man in Kieth Flint, with his punk haircut, Firestarter was a great video,Smack My Bitch Up told from a first person point of view of a party animal having sex, snorting cocain, being violently sick, then turning out to be female, the most scary video was breathe. Told in a David Fincher Seven type of way, with cockroaches crawling about in dimly lit areas, crocodiles, yes you heard me, filmed with the members of The Prodigy in what is Looking like zombie type makeup, but filmed with such a grimey dirty way, with the Band members actually looking terrifying is why I love this video.

Slayer Repentless
This band has always been a controversial band, upsetting Christians in America for decades, from Hell Awaits, To God Hates Us All,Christ Illusion, to the song Jihad so soon after 911, with the band actually being very Christian based, very quiet in their own social lives, but playing up to the whole we are devil worshippers. With the band reforming with a new line up after a six year break, loosing two of the founder members Drummer Dave Lombardo, and the guitarist Jeff Hanneman, who sadly passed away in 2013, coincidentally on the same day my dad passed away. Most fans believed they shouldn't carry on, but they did, with this song the first single from the album Repentless, and what an attack on the senses it was.
Told from the point of view of a prison riot, we have severe beatings, stabbings, throats being cut, and err Danny Trejo, in this bloodbath, with Slayer playing amonst this madness, is a true attack on your senses, banned from any daytime video slots, only available after midnight in the UK, this video truly showed Slayer were back.

Metallica Enter Sandman.
From probably their best album since Master Of Puppents came the Black Album, or simply titled Metallica. With great singles, and not a bad song on that album, from Nothing Else Matter, Sad But True,The Unforgiven and the very scary,but best ever single Enter Sandman.
With its dream like imagery, stuck in a nightmare, using the one thing we all need, that is sleep, and to make us terrified of it, just like Wes Craven, and Freddy Krueger did in the Nightmare On Elm Street films, to have us terrified of the one thing all parents tell you about the sandman, who will come and help you to sleep, then to have some of the best dream like images, scaring us, to a very freaky sandman, we have a video 25 years old, but still scary now.

Slipknot The Devinl In I.
Another return to form for the band, that many thought would never reform, after the death of founding member Paul Gray, with the band from Des Moines Iowa in mourning for years, with Corey Taylor, the lead vocalist with this band and Stone Sour, actually admitted that it was a tough few years to pull this very tight band back together again. But they did after a five year absence with their fifth album 5: The Gray Chapter, with the Devil In I the first single. What a single it was, with a very clever marketing came for months, on social media showing snippets of the video, with the final video coming out with a photo of the band members new masks, and what a video it is. With all the band members featured in it, all doing unthinkable things to each other in the form of suicide or self harm. We have A face ripped off, a hanging whilst being set on fire, a man exploding, and a member having his eyes pecked out by crows, it is vile, bloody offensive, but bloody ace, and my favourite songs in recent years.

Aphex Twin Come To Daddy.
This has to be the scariest, most freakish video I have ever seen, and even now almost twenty years later is still the most uncomfortable music video I have ever seen. Richard David James, born in Ireland In 1971, but has been one of the most creative artists in ambient, and acid music under the name of Aphex Twin. With great album, and single covers, and creating one of the best, but unnerving videos ever made for Come To Daddy. We have children running about all with the same face, and that is of Richard David James, we have a demon that torments an elderly lady, again looking like Richard, the video and song is brilliantly freaky, scary and incredibly unnerving, and is my most disturbing music video I have ever seen.