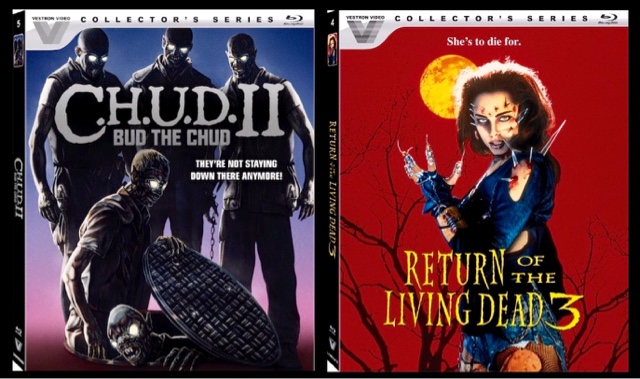 Straight out of the Vestron archives comes these two b-movie classics, I'm being totally honest I've only seen one of these films, Return Of The Living Dead 3, and was underwhelmed by the whole experience, but hopefully I can look at it again and enjoy it as much as I loved the two previous classics. I've never seen C.H.U.D never mind the sequel, but both are coming out filled with extras, great artwork on the covers, and is produced with genuine love from Lionsgate to give credit to that great independent label that was Vestron in the eighties to early nineties, that gave a viewing platform to these films, that probably wouldn't have seen the light of day otherwise.
Return Of The Living Dead 3.
The story of a loving couple, who survived the original Zombie outbreak Curt "J.Trevor Edmond" and his girlfriend Mindy " Melinda Clarke" who realise the cause of the outbreak was due to a toxic substance the army had created to reanimate its soldiers, obviously with devastating effects. When Mindy is killed in a tragic motorcycle accident, Curt breaks into this army laboratory, to get this drug to bring back his girlfriend, with obvious dangerous side effects as she has a taste for human brains " they're so spicy though"
With this movie being directed by Brian Yuzna, on his third attempt at directing having Society, and Bride Of Re-animator under his belt.

“Romeo Is Bleeding” – An Interview with Actor J. Trevor Edmond

With the US government abandon tests on the secret C.H.U.D ( cannabalistic humanoid underground dweller) they destroy the project but accidentally leave Bud at the CDC, in a small American town, to only have a bunch of bumbling teens awaken the creature when they break into the facility. To then have Bud escape to create an army of C.H.U.D.S.