Horror, thriller and Sci-Fi releases next week for the UK only. 19th September 2016. Hope you take a look and enjoy. 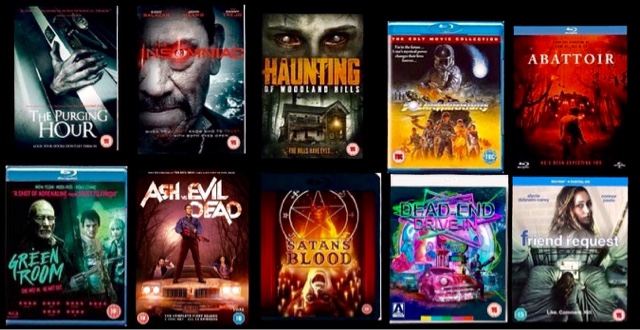 Just a few of the horror releases for the UK next week 19th September, with the notable Ash Vs Evil Dead the fantastic series from Starz productions on a two disk Bluray and DVD containing all 10 episodes. The other adrenaline paced thriller Green Room, is Anton Yeltsin's last film role, with Patrick Stuart in his scariest and most calculated performance ever, and he is the bad guy. We have another movie in the vain of Unfriended, Hacked and Smiley about a presence using social media to stalk and kill. I'm not to sure what Abattoir, is about but I do know it stars Lin Shay. As for the rest of the titles I have no idea, straight to video, they may be okay I'm not sure as I haven't seen them yet, but I did notice another Danny Trejo film, in what will probably be a cameo performance, but will have his image splashed all over the DVD cover. These are the only titles I found online, there could be more releases, it is that most of the film companies do not tend to talk back to me very much, so finding all release dates from all studios is quite taxing.