DVD and Bluray releases for UK only. All available from September 26th 2016. 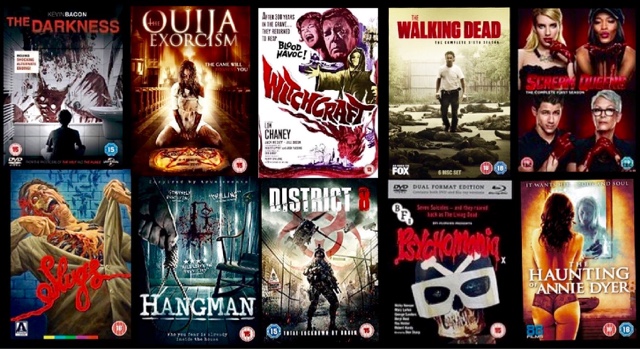 Just a few of the releases that will be released tomorrow in the UK, from the Walking Dead season 6, to Scream Queens season 1, with some classics such as Witchcraft, and Slugs, with Psychomania. We have the Darkness one of the biggest studio releases starring Kevin Bacon, and the others I have never heard of. I know Slugs will have the usual Arror Films professional treatment, The Walking Dead ending on one of the worst cliff hangers, with Negan's eeny meeny miny moe and which major character was beaten to death by the barbed wire baseball bat, as it cuts to black.
The Darkness from Blumhouse, starring Kevin Bacon, Radha Mitchell, in a so called, based on a true story, about a family who bring back some supernatural force, whilst visiting the Grand Canyon. We have from 1988 the film Slugs, this Spanish directed movie about a small town being plagued by these killer slugs, which are caught up in some environmental disaster.Psychomania is a cult British film from 1973, about a biker gang who make a pact with the Devil, to become immortal to terrorise the locals.The Haunting of Annie Dyer, or otherwise known as Nocturnal Activity is a 2014 British produced film. The film is about Annie Dyer who moves into this London apartment, who realises she is not alone,with some malevolent spirit who wants to take over her body, it is distributed by 88 films, and has a decent amount of special features, and only £7,00. Ouija Exorcism I would watch on Netflix as it is currently being shown on UK Netflix. I couldn't find hardly any information about Hangman and District 8. Hope these will wet your appetite for all things horror.