From director Richard Kelly the mind f@@k film of the 2000's from a very talented writer and director, unfortunately this being the debut film he will only ever be remembered for.
Starring a very young Jake Gyllenhall, Patrick Swayze, Noah Wyle, Drew Barrymore, Mary McDonnell. The story about time travel, parallel universes, six foot scary rabbits, air plane engines, and one of the cleverest, but mind f@@k scripts ever put to celluloid, is getting the 4K treatment on a dual format release, 4 disks in a great gatefold sleeve from the always reliable Arrow Films.
With both the Cinematic cut, and the directors cut of the movie.
Priced at £27, 99, running time 113, 133 minutes.

Brand new 4K restorations of both the Theatrical Cut and the Director’s Cut from the original camera negatives produced by Arrow Films exclusively for this release, supervised and approved by director Richard Kelly and cinematographer Steven Poster.

Audio commentary by Kelly and filmmaker Kevin Smith on the Director’s Cut.

Brand-new interviews with cast and crew, including Richard Kelly.

The Goodbye Place, Kelly’s 1996 short film, which anticipates some of the themes and ideas of his feature films.

Twenty deleted and alternate scenes with optional commentary by Kelly. 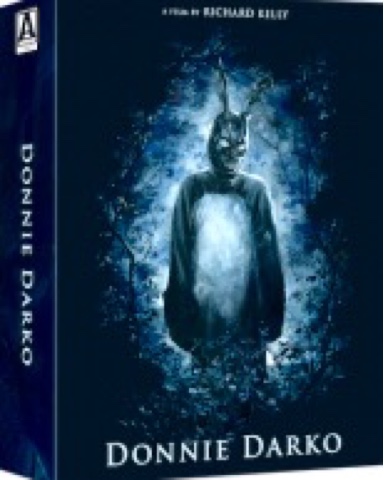