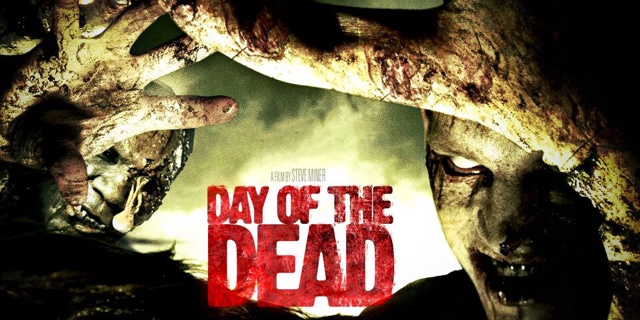 I watched last night probably the worst Zombie film I have ever seen, it was absolutely hilarious, yet was not made to be a comedy in any shape or form. From Steve Miner in his worst film of his career, and it is such a shame to see him fail. Yes I know he has done most types of movies, like Soul Man,My Father The Hero, Forever Young, and directing some of  The Wonder Years TV series, but for a director who actually cut his mustard In the early eighties with Friday The Thirteenth  2, 3 as director, then directing House which is one of favourite films of that decade, to the equally brilliant Warlock with Richard E Grant, and Julian Sands, this man has experience in horror, so why is this film such a mess.
The film is so terrible as it tried to be an original type movie in in its own right, not wanting to borrow, or copy the original in any way, but actually making its own version, which is absolutely awful.
With no reference to Dawn or even Night Of The Living Dead, which has both been remade, and both not the best, although Zac Snyder's Dawn was passable, and his best work to date, alongside Watchmen of cause, his other Super Hero films suck ass though.
Anyway back to this movie, with a viral infection affecting this small town once more, with this part of the movie quite believable and actually working at this point, with hundreds of seriously ill people putting hospitals under pressure, with the Army being called in to control order. The scenes before people turn is actually decent too, with subjects going completely vacant, then cutting to the damage being done within the persons brain, is done well, then we resort to the latest form of Zombies now, ones that move quickly, borrowed from Danny Boyle's 28 days later, in this movie they actually fly, and I kid you not, with one laughable scene of a zombie climbing the wall, and running on the celiling, like some demonic super hero. Now get me wrong when a person just turns, I get that they will be more able, before the body starts decomposing, and degrading, but to have them with super human strength, and almost demonic type qualities is why this film is absolutely laughable and hilarious to watch. With shoddy make up effects, terrible acting, directed absolutely abysmally, using fast motion, and speeded up scenes, cutting to grainy type imagery, within sometimes the same frame, it is shocking to watch, especially from a veteran of over 30 years experience, looking like it is filmed from a kid straight out of film school wanting to try all the tricks he learnt whilst there.
All in all it is without doubt the worst Zombie movie I have ever seen, and is shocking to share the same name as George Romero's eighties classic.
This version is an insult to your intelligence, and a shameful piece of celluloid wasted, a sham, a con, and the worst movie I have ever seen.
1/5⭐️