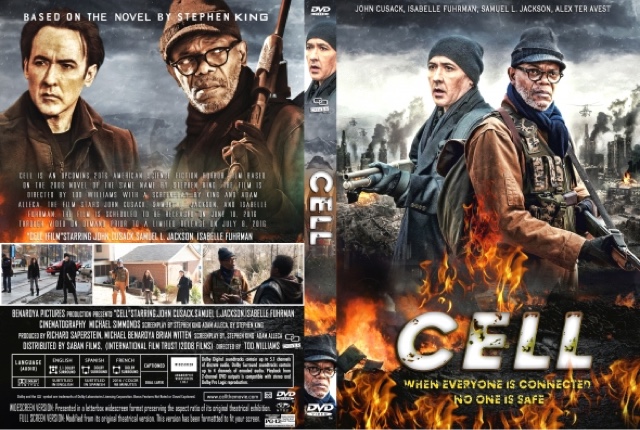 Released this month on VOD streaming services,and making its debut with a limited cinema release next month,based on Stephen King's 2006 book of the same name,starring John Cusack  and Samuel L Jackson in their second screen appearance together since 1408, the other Stephen King's adapted story which was a decent film,this film is dreadful,with great actors,who have obviously been contracted to work for this studio,or really cannot both be bothered, as both performances or so lacklustre. Shame  as it really has a decent idea,and like the film Antisocial last year,about the public reliance on social media and modern technology,which turns people into violent drones intent on attacking each other.
With in fairness a great start, with the action happening immediately,divorced dad and successful Graphic artist Clay Riddel (Cusack) is on the phone to his ex wife at the airport terminal,his cell phone dies so he uses old technology the pay phone,at this precise moment a signal is sent to all cell phones,and anyone using them at that precise time turn into a violent rage driven by killing,and wanting to seriously hurt anyone who hasn't turned,that hunt in packs with other turned phone users called (phoners).
With subway operator Tom ( Samuel L Jackson) and Cusack's old neighbour played by Isabelle Fuhrman (Orphan). They all survive together,and then soon realise the pattern of the Phoners they attack as one in the daytime,as one collective,but become dormant at night,also collectively whilst rebooting and saving energy. With one Cell phone tower believed to be responsible for the signal they set out to destroy it to end the apocalypse. It really is a shame that this movie has such potential,and coming from a good book,but being a Stephen King novel,the same as this film,the ending both turn into a confusing farce, it is like he never knows how to properly end a novel. This film unfortunately is another example of that, a totally forgettable film from a Stephen King story,that once again is a failure, with the only Successful novel to be turned into a great Mini-Series recently the fantastic 22.11.63 on Hula and Fox UK.
With the worst opening titles and credit sequence at the start of the movie,sets this film up to be a dire effort,with dreadful acting,and a dreadful haircut for John Cusak,we have such a disappointment of a film,that has a great idea,but fails miserably.
2/5⭐️⭐️