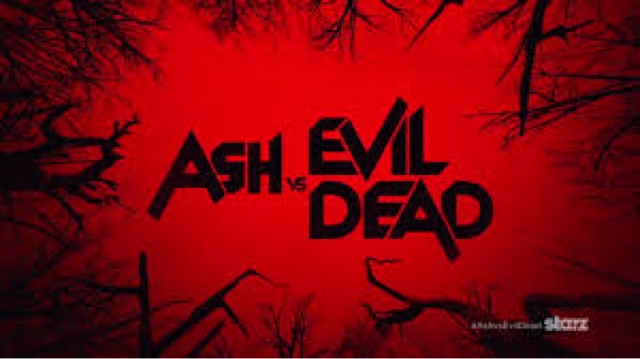 After binge watching this in a day, yes the entire series in one sitting, I can say what a fu##ing return to form. From the original creators, Sam Raimi, Rob Tapert and Bruce Campbell, comes a return to form to the franchise that was so sadly missing from the 2013 reboot, and that my friends is humour and heart. To wait almost 22 years from The Army Of Darkness, is such a long time to be without our hero Ash, doing what he was born to do, chopping up demons and sending them back to the deepest of Hell.
Set 30 years later from Evil Dead 2, Dead By Dawn, Ashley "Ash" Williams is still working in a dead end job, in a local supermarket, he still hasn't lost his charm, wit, and sexiness with the ladies, with a drunken night of sexual exploitation, marijuana use, and reading poetry from the necronomicon "the book of the dead" he summons the long lost evil once more into the world, and is forced into doing his greatest tricks once more,  killing Deadite's.
With his two co-workers in tow Paplo " Ray Santiago" the feisty Kelly Maxwell " Dana DeLorenzo", with a cop in pursuit Amanda Fisher " Jill Marie Jones" who is on forced leave for shooting her detective parter, but is determined to find the cause of all these dismembered bodies in her wake, with reports of a man with a great chin, and chainsaw for a hand, leaving bloody murder scenes in his wake.
We have one of the greatest TV series I have ever seen, absolutely bloody disgusting in places, and stomach churning violence, to stomach hurting from laughing and chuckling so much. The violence is shocking and brutal, but with it coming such wit from such  a great actor Bruce Campbell, an actor who has so much coolness, literally coming from every pore in his body, yet has never hit the mainstream Hollywood, choosing to be a bit part actor in many films since the eighties. This man is legendary, and you know he was my man crush for four and a half hours, whilst I watched, laughed, almost threw up from the bloody violence onscreen. I cannot state how good this series is, from every actor involved, the directors, the make-up, the effects, the incredible writing,that has absolutely no filler episodes, having each episode at only 26 minutes long, with bloodshed in every episode, and some of the best one liners from Ash, hundreds to remember, this series is phenomenal, there is no other word to describe this fantastic show.
An absolute blood festival of fun and gore, that will have you shocked one moment, then rolling about with laughter the next, just amazing work.
5/5⭐️⭐️⭐️⭐️⭐️
DVD and Bluray special features
Audio Commentaries on all episodes.
Ash inside the world.
How to kill a Deadite.
Best of Ash.
On a two disk set including all ten episodes from season 1.
Episodes are
1. El Jefe.
2. Bait.
3. Books From Beyond
4. Brujo.
5. The Host.
6. The Killer Of Killers.
7. Fire In The Hole.
8. Ashes To Ashes.
9. Bound In Flesh.
10 The Dark One.