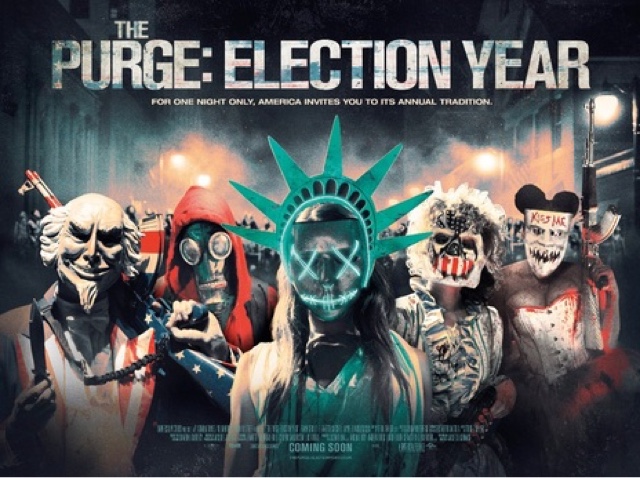 Welcome to the year 2040, this distopian future that really is the sickest of any movie franchise,the future when the far right, the NFFA have for many years decided the best way to eradicate crime,is to make it legal for one night in March,including rape,murder,which stops crime all year round,and for one night the sickest in society can vent their anger,and their right to kill.
A film that surprisingly isn't so far away especially in America with the Republican front runner in this years election,serious right wing political views,even the other day inciting gun owners to use the 2nd amendment and the right to bare arms,and use it against Hiliary Clinton. Yes it was an off the cuff statement,and maybe not a big thing was made in the states,but here in the UK it was front page news,saying what a horrible dangerous man he is,and could be,inciting NRA members to kill,it is almost straight out of this movie. The fact this movie was made before any of the front runners were chosen,just goes to prove how Hollywood has a habit of almost getting,and predicting the future.
With the true message being put into this movie,that the rich,and powerful in society will always prevail,and the idea of this Purging is to rid the American society of the poor,needy,and drains on the normal running of this country, that deep down most political parties,especially the far right minded,would like to happen. Believe you me,we in the UK have had our fair share of austerity,with all welfare cuts to the poorest in society,whilst the richest got richer.
That is why this film is so scary,and what if it actually happened. With this film in my opinion being the best of the franchise,like Insidious,with number 3 being the best of the franchise,we have this one,with Frank Grillo ( Leo Barnes) reprising his role once more from the second movie,and is now chief of security for the anti purge running alternative Senator Charlie Roan (Elizabeth Mittchell), who is the front runner in this years Presidential race,with the NFFA not happy about this,and changing the rules on this years purge, that no political official will be exempt from the Purge,making Senator Charlie Roan an easy target for an assassination attempt on Purge Night.
With Leo Barnes watching her in her family home with other secret service agents,it becomes apparent that a traitor is in his own camp,and soon the Senator's life is in danger,luckily Leo super guessed this and had his own panic room,and escape route planned,that only he knew about,with the house rigged to blow in that certainty. He and Senator Charlie Roan are now easy targets on the streets of Washington D.C,having to battle though the other Purgers,and with the NFFA hit squad is still out to find and eliminate her.
The one thing that I did like about this movie is Frank Grillo's character Leo Barnes is not perfect,he isn't a John MacLaine and bullets fly off him,and miss him completely,he is an ordinary man,flawed,not impervious to bullets,or pain,and gets into as many scrapes,and almost loses the life of himself and the Senator. If it wasn't for other decent minded citizens,that help them and give them shelter,proving out of all this chaos and madness,and all the really bad natured people in the world,their are always the decent souls in any violent society,who will stand up to this barbaric night. As it turns out Senator Roan is incredibly popular,especially with these like minded decent people,and is the reason the NFFA is so determined to eliminate her,with her proving this first hand,with Death Squads like the previous movie,eliminating poor areas,and Towerblocks,proving her own point that is the NFFA real agenda.
With an excellent supporting cast Mykelti Williamson as store owner Joe Dickson,Joseph Julian Soria as Marcos, Joe's loyal co-worker at the store, Betty Gabriel as Laney Rucker an EMT nurse,who risks her life going out in an armoured ambulance to treat victims of the Purge on Purge night.
Although I hate the whole premise of this movie,as an action packed,survival movie it is really decent,some of the deaths in this although shocking,you can't but think to yourself "they deserved it" with us really wanting Leo,Charlie,Joe,Marcos and Laney to survive this brutal night,with an ending that in some ways stops another sequel from happening,But I wouldn't be surprised if another one pops up next year.
A shocking brutal vision of a disturbing future,and the decent people willing to risk life and limb to end it,a brilliant film,saving the best till last.
4/5⭐️⭐️⭐️⭐️ 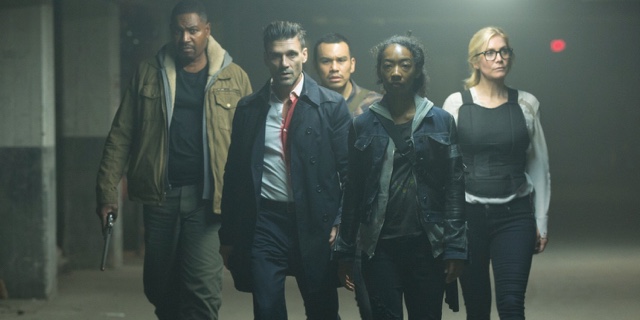