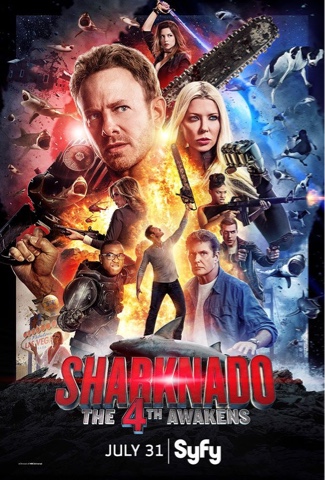 Here it is,finally hitting our screens in America on the 31st July,and August 2nd UK on Syfy,set a whole five years have passed since the previous movie,with no Sharknado attacks in that time. We have Fin with his five year old son Gil,who is obsessed with sharks,and is convinced his mother April is one. Well talking of April, she has been on life support for 4 years with Fin
finally allowing it to be switched off,thinking she has passed away but is secretly taken under the wing of her father,who has turned her into an ass kicking half woman half machine cyborg. We have Tech mogul Aston Reynolds,who has developed an early warning,and storm disabling device called Astro-X,that has successfully stopped any Sharknado attacks in five years. The film starts in Las Vegas with Fin meeting his oldest son Matt,who is getting married in a mad Skyfall wedding to his finacé Gabrielle,the plane somehow causes a sandstorm in the dessert,that soon whips up into a tornado,that smashes into Fin's Hotel,full of shark tanks causing yes you've guessed another Sharknado. With sharks being killed by the Chippendales using their crutches as weapons. Fin and other Las Veags residents manage to survive this Sharknado attack,but the Sharknado is headied back out into the dessert,where if gathers millions of gallons of water from the hover dam,with the Grand Canyon having to be destroyed to soak up the flood from Astro-X causing another dilemma for hero Fin, a Bouldernado,that passes over Texas Oil fields creating an Oilnado,whilst cactching on fire turning into a Firenado.
We then have an unstoppable Lightningnado,as it passes over power lines,to the most devastating a Nuclearnado as it destroys a Nuclear Power plant in Ohio,with radioactive killer sharks,that disintegrate you on impact. The Nuclearnado needs to be supercooled by water to transform it back into a normal Sharknado that can then be stopped by Astro-X.
We have Fin the hero once more as he climbs into an experimental suit,alongside with April who he is reunited to,just after Las Vegas,and she is very much alive,they both fly " yes fly" into the Nuclearnado to supercool it,
which they manage,and the normal Sharknado is stopped In time by Astro-X,but doesn't stop multiple sharks from swallowing whole himself,his dad,his son and daughter by multiple sharks.
We have once again a cliff hanger of an ending once more.
I being honest I loved the first three and got passed all the stupidness,but this one just became completely absurd,with the different Nados,especially the Nuclear aspect,that would have killed anyone with radioactive poisoning,look at Chernobyl in Russia, that exploded carrying radioactive waste as far field as the Valleys In Wales in Great Britain. I just couldn't accept  this part of the film,that completely took any kind of natural reasoning,and made a complete mess of a film that I was completely enjoying up untill the final third. The acting is the worst I have seen in all 4 movies,with Tara Reid having more screen time and proving what a shit,terrible actress she really is,yes I have always known that,but this film is terrible,and so is she.
I really wanted to enjoy this film,and up untill the midway point I thoroughly was,then it became a complete mess of a film that devoid of any logic,worse than any other of the films,that made this unwatchable.
I loved the Cameos, Corey Taylor from Slipnot,Vince Neil from Motley Crue, Gary Busey as April's mad scientist Dad,Tommy Davidson as Aston Reynolds,Caroline Williams as a Chainsaw shop owner playing homage to her staring in that classic film Texas Chainsaw Massacre,Steve Guttenberg as an owner of that most famous cursed car Christine,that Fin borrows to save his family from that huge ball of twine in Cawket City of Kansas. My favourite line though does come from Fin's son Gil,where the barn they were seeking shelter from in Kansas is swept away in the massive Sharknado and lands in Chicago,with his son saying "Dad we ain't in Kanas no more"
With most scenes working,but the finale just spoilt the whole thing for me,yes it is still completely watchable,silly and really enjoyable nonsense,but it is not as good as number 2 or even number 3 for me,a little disappointing as the previous movies were great, this was just plain average made decent by very clever cameos and nods to old horror films is where it really works.
2/5⭐️⭐️ 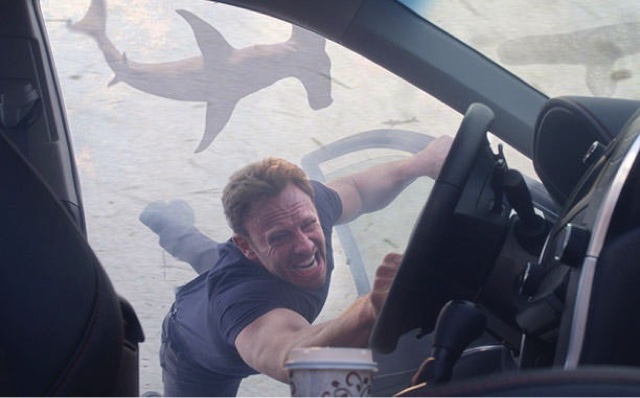