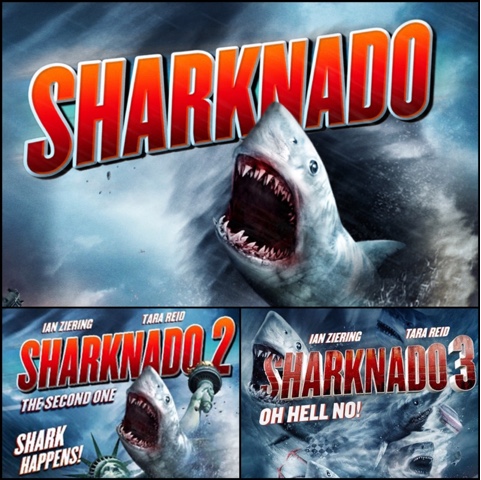 I have had a marathon of these films including the 4th, Sharknado The 4th Awakens.
Six plus hours of my life this week,but you know I don't feel guilty about this,as these films are truly a guilty pleasure, with two actors that feature throughout starring Ian Ziering and Tara Reid,and across three major cities  Los Angeles in number 1, New York in the second one,and finally Washington DC in Sharknado 3 Oh Hell No!.
Three completely preposterous films,so bad they are brilliant,all debuted on Syfy Channel,and one now for every year since 2013. A film so  popular that actors,presenters, rock and music stars,writers are queuing up to be a part of this franchise,a film that has become a who's, who of celebrity cameos.
When severe weather storms,tornadoes sucking up the Shark wildlife with it,then hitting major cities,with the Sharks able to survive as the funnels are surrounded by water,with flying sharks hitting buildings,passers by,then eating them,in funny brutal ways.
Sharknado, Directed by Anthony C. Ferrante.
When a freak cyclone hits Los Angeles,causing a vortex in which man eating sharks are scooped out of the water,and floods parts of Los Angeles, it is up to bar owner Finley "Fin" Shepard "Ian Ziering" to rescue his estranged wife April Wexler "Tara Reid" and his daughter Claudia "Aubrey Peeples" from these killer sharks. Little does he know a tornado is coming soon filled with sharks a "Sharknado "
The film that started it all, the film is actually terrible,the acting is shocking,but you know it is enjoyable crap. A film so bad it is good, I honestly thought I would hate this,but it is surprisingly really enjoyable,even if it is so bad. I have known about it for years but refused to watch,but investing a lot of hours in this franchise  this week has paid off,and I'm a fan,and not afraid to admit.
Sharknado 2 The Second One. Directed Anthony C. Ferrante.
We Have Fin and April flying to New York to promote their combined book on how to survive a Sharknado,and yes another Sharknado happens,and disables the plane mid air,whilst eating the passengers, Fin manages to fly and land the aircraft safely,whilst battling sharks April loses an arm,which she later does an Ash from evil dead and has a buzz saw attached to it to kill maximum Sharks. We have Floods in New York,with Subway stations,being flooded and passengers being eaten by sharks. We have an aspiring speech from Fin to encourage all New Yorkers to fight back,and he once again is eaten by a huge great white,to have him appearing from its tail chainsaw in hand.
In actual fact I enjoyed this more than the previous film,the acting is as bad,but more enthusiastic,and more over the top we have more kills,more gore,and a shit load of cameos, Kelly Osbourne eaten in the plane,Robert Hayes as the Pilot,Will Weaton as another passenger, scream queen Tiffany Shepis is eaten by a flying shark, Judd Hirch from Taxi dies whilst being crap at rope swings,Richard Kind is an ace with a baseball bat, with WWE star Kurt Angle who survives all this madness.
Sharknado 3 Oh Hell No! Directed by Anthony C. Ferrante.
Fin Shepard is in Washington D.C to receive a medal of honour from the president,for services on defeating successful Sharknados. Once again another Sharknado strikes the capital,and Fin and the president have to survive and work together to survive another Sharknado attack. Fin then has to travel to Florida because his Wife April and Claudia are at Universal studios for a vacation. On route Fin encounters something new a fognado,which is stopped by Fin's old friend Nova,whilst a huge bomb is detonated into the funnel over Daytona 500. A huge storm is expected to turn into a superstorm called a "Sharkicane",in which Fin realises that the only way to stop this huge storm is an attack from space,where he calls on a favour from his dad who work coincidentally works at NASA,this is where we have shark attacks in space,Fin and Aprill are both swallowed by giant sharks,that fall back to earth,after the shuttle they are in is destroyed,they both survive,untill a huge fragment of space shuttle is about to land on April,the series the ends at that point,not knowing whether April lives or dies.
The cameo roles are turned to the max in this one,we Have Bo Derek as April's mum,we have Malcolm in the middle star Frankie Muniz,David Hasselhoff "the Hoff" as Fin's dad, Penn and Teller are employees of NASA,Jerry Springer is an unfortunate Tourist eaten at universal Studios,we even have the writer of Game Of Thrones George R.R. Martin eaten in a cinema.
This film is once again preposterous,trying to out do the stupidity of the previous films,but stupidity that actually works,the unbelievably absurd set pieces just work,with a writer thinking how can I make this franchise even better and dafter  "I know lets have it end in space" is amazing. I would have loved to have been in a meeting of studio executives,and be a fly on the wall to hear Anthony C.Ferrante and Writer Thunder Levin explaining how a film about killer sharks in tornadoes will work,and you know it just does.
A film franchise that is terrible,but just so damm enjoyable,the most stupid film franchise ever made,but one that just works,it is stupidly violent,bloody but funny with tongue firmly in cheek always.
For this franchise An easy combined 3/5⭐️⭐️⭐️ 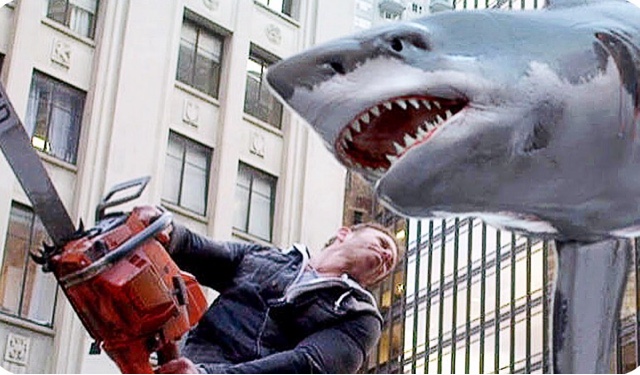