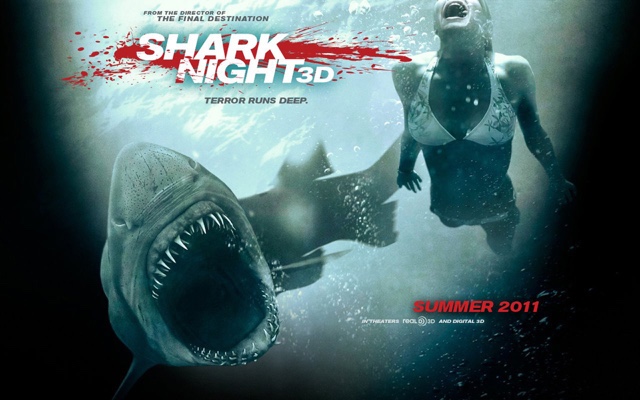 A film that should have been a poor relation to Jaws,that actually ended up being quite decent,at least it was actually filmed in native 3D technology,and not being added in post production,and one of the few films filmed around that time period that actually benefited from this technology,namely Drive Angry,Dredd 3D,both commercial flops,but both being amazing in what this technology was made for,make a film,that wasn't always the best,but made them look amazing through 3D technology.
Directed by David R. Ellis the director of The Final Destination and Snakes On A Plane,starring Sara Paxton, not Unknown to horror starring in The Last House On The Left,Innkeepers and Cheap Thrills,a film that gathers a bunch of good looking young people together,always for a weekend break,at a cabin near a lovely lake,then to eventually be eaten by not just one shark in the lake,but all breeds of the man eating mammals. Turns out all the teens are part of an elaborate dark web experiment,with underwater cameras placed all round this lake to capture underwater kills,from these giant beasts,that have  been released into this lake for this purpose,with people paying a paid subscription to watch these huge beasts kill and maim people in this lake.

It sounds preposterous,but the film isn't a bad film,using state of the art animatronic Sharks,one made each just for the swimming sequences,and one for the attack scenes,but being filmed in native 3D is where this film works,and I have seen both versions,and the 3D version does add serious depth into the film,especially the underwater scenes. Yes it has low scores on all internet review sites, 17% on Rotten Tomatoes,and with it being a watered down PG 13 rating,leaving out a lot of blood and gore,and being marketed as a teen thriller,is why this film was seriously knocked,but making back over 40 million dollars on a modest budget,actually made this film a commercial success.
It isn't as good as Jaws,Open Water,in the thrills stakes,and not as tension packed,but it is twice the film Deep Blue Sea was,with actual real looking sharks instead of crappy CGI,this film is actually well acted,and have characters we actually care for,with some great looking bikini wearing actresses to boot,we have boobs,bums,and some kills,not very brutal,but kills all the same,and with more gore added to the UK version,being a 15 certificate over here,it really isn't the bad film it is made out to be.
3/5⭐️⭐️⭐️