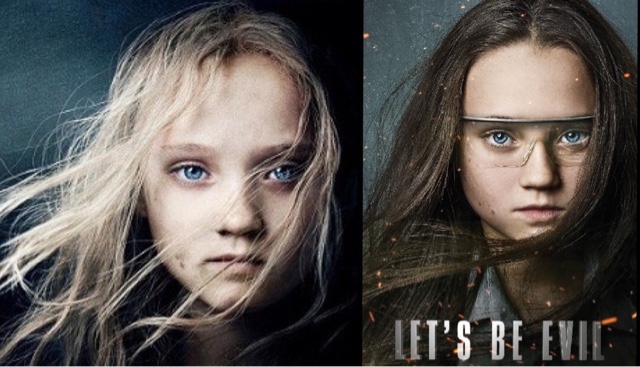 Let's Be Evil, in all fairness the cleverest part of this movie, is using the same actress Isabelle Allen, and using the same pose from the poster Les Miserable,as shown above, apart from that observation the rest of this movie is extremely forgettable. Co Written by and Starring Elizabeth Morris as Jenny, using for the first time I believe augmented reality, you know that fancy app you can get on smartphones and Nintendo DS, when you point the camera at an image the image comes alive as a 3D holographic image. This movie uses this technology to raise the next generation of super kids, in a laboratory environment, with kids wearing these augmented reality glasses, they can see, touch learn multiple things at once. With Jenny getting a job as what she thought was a Nanny position, looking after these kids, alarm bells does not start ringing,when she turns up at this state of the art facility, told she will be sleeping here,eating here, and is under strict rules from an AI intelligence called Arial, the fittest looking naked hologram I have ever seen, with the body sequences filmed by actress Jamie Bernadette.
Co starring former Eastenders actress Kara Toiten as (Tiggs) and  Elliot James Landridge (Darby) in what I think, and this is my opinion,a British made film, but I cannot find enough information about it online yet, as the voice of Arial is English, and some of the props,although leading us to believe is American, I can actually see the telephone Jenny answers in the opening segment is the same budget phone I have at home, purchased from Tesco's, even some of the set pieces,is reminiscent of British architecture, it could just be me, but finding info about this film is extremely vague online.

Anyway back to the movie, Darby, Jenny And Tiggs have to ferry these kids about, have strict breaks, and sleeping patterns, whilst watching these kids, with zero personalities, no social skills, apart from one child Cassandra (Isabelle Allen) who seems to be different from the other children, as it turns out the experiment is to turn kids into drones, who when connected think as one, a hive as sorts, with Cassandra refusing to be part of this.
It is from the midway point that the AI of Arial, and the glasses Jenny is wearing starts playing devious tricks on her. Then for no reason at all, and no explanation the children turn violent and start turning on thier Nannies. With the final third of the film, being filmed in almost entire darkness, crawling about in crawl spaces,escaping from these deranged children.
I will give the plus points first, the film does look amazing, with the neon colours, the VR world created is impressive, and the film is clearly more about style over substance, the corridor of light scenes is seriously impressive,reminiscent of Staney Kubrick's The Shining,and used in many horror films since.
Elizabeth Morris as well as being extremely attractive, is a young star to look out for, as she does carry this film well, as it is all about her in the final third, and she is totally watchable and believable in her role.
Using the idea of augmented reality rather than the bog standard VR technologies we are about to start using again,is very clever, and has never really been tapped into before.
Now the negativity, the whole film is filmed from the first person view,and becomes annoying and repetitive from very early on. The film is far too dialogue heavy, with zero happening in the first 40 minutes of screen time, leaving the final twenty minutes to fit everything in.
The film is also void of any tension, using first person views, surly you could have had more scares,and more people jumping out on you, used brilliantly in Pandemic and Hardcore Henry.
Kara Toiten is such a disappointment in this, yes she can dance in Strictly Come Dancing, and sing in the live version of The Sound Of Music on ITV, but she cannot act, she is stunningly gorgeous, but in this  film,especially using an American accent, it just doesn't work, if I have to hear her pronounce the word "Darrrrrrrby" once more I might lose my mind like the kids do in this film.

The film as I said it is style over substance, it looks gorgeous,the lighting, the set pieces, the corridor of light is impressive, but it is no good,if you don't have a good script, bad acting in places,and a film about dangerous kids, but not seeing them do anything is pointless. A complete mess of a film that could have been quite decent, with more scares, better acting, less character development, then again all that was probably necessary to fund the parts of the film that does work,mainly the visual effects,and lighting. It is a disappointing film,with one good side Elizabeth Morris is a star to look out for in the future, even her great performance cannot stop this film being very average indeed though.
2/5⭐️⭐️ 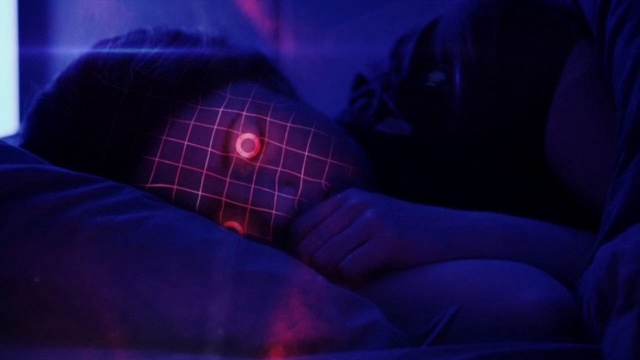