Gridlocked (2015) Film Review. Distributed by Magnet Releasing US, Kaleidoscope UK. Directed by Allan Ungar. Available now on DVD and Bluray US, available In the UK on Netflix,and to buy on 12th September 2016 UK. Rated R Restricted US,15 certificate UK. 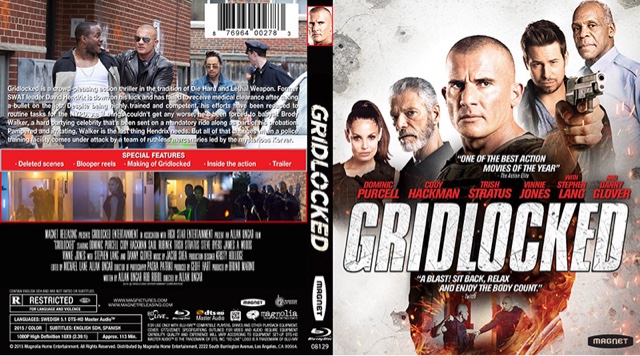 Think of this movie as a cross between Assault On Precinct 13 and The Hard Way,another straight to Bluray and DVD movie that as violent action films go isn't the worst, just don't expect anything groundbreaking either.
Starring Prison Break's Dominic Purcell (David Hendrix) a quick replacement for the role that was originally offered to Cuba Gooding JR,with the usual bad guy Stephen Lang ( Korver),with the very British Vinnie Jones ( Ryker) as his right hand henchman, also starring WWE Wrestling star Trish Stratus (Gina),and newcomer Cody Hackman ( Brody Walker) with a very short cameo from Roger Glover.
With Hollywood Bad boy Brody Walker (Hackman) on his last chance,after assaulting a paparazzi,then drink driving,he is this time going to prison,and not even his publicist,and agent can stop him. Unless he shows he has respect for the judicial system,he pleads guilty on a plea charge,and will have to serve community service chaperoning a hardend police detective David Hendrix (Purcell) sounds boring doesn't it,except the detective was once part of an elite police unit,like an underground swat team,and is longing to get back to it.
We then cut back to David ( Purcell) returning to his old unit,with Brody tagging along,to meet his old colleagues,the problem is they are about to come under siege from this heavily armed military unit,determined to take over this police operated building,at first not knowing the reason why,with hints and news stories about a visit from the Israli President to the States,and maybe it is an assassination attempt. No disappointingly it is what it always turns out to be,just a standard robbery based movie,as it turns out this building is used for sometimes illegal activities,involving holding hidden evidence,drugs,money,and millions in untraceable bonds, "why are they always untraceable?".
We have a vicious standoff between David,his old colleagues against Korver (Lang) and his guns for hire,so called trained Soliders,who cannot like most bad guys shoot for shit,and are easily taken down in a gunfight by Swat officers.
The violence at least is visceral,we have some very gruesome deaths,and for a R rated film,probably the most violent film of this type since Schwarzenegger's Sabotage. We have a lot of senseless deaths as well,that are terrible,but also the reason we gore and action hounds love these type of films,with a lovely old couple being gunned down viciously,to gain access to their house,for the start and planning on this attack on the Police building.
This film is at least violent,it does what it says on the cover for once,and is bloody,I do have a lot of gripes,my main one is the character Gina (Trish Stratus) WWE superstar,yes she is stunning,she isn't actually that bad an actress ,and can hold her own amonst the testosterone of all the men on screen. My big gripe is, yes she is tough as nails,can beat the shit out of Everyman,but why is the only reason she can do this is because she is a lesbian,that she mentions almost immediately after introducing herself to the actor Brody Walker, that really just annoyed me that all tough stereotypes especially women have to be shown as being gay,if they are tough as nails,and cannot be tough and effeminate also.
Just a small gripe I susposed,but then again the whole movie is one big action movie stereotype,with the usual by the numbers bad guys,and the good looking male movie stars,that are instantly the heroes whilst all the bad guys are just average,to ugly shaved headed men with scars,and British accents.
Still as action violent films go it isn't bad,you get what you pay for violence,and that is what we want,we don't really need it to be almost two hours long,90 minutes would have been quite sufficient movie length for this type of film,but a little fast forwarding you can get to the action in the final third and you won't be disappointed.
2/5⭐️⭐️ 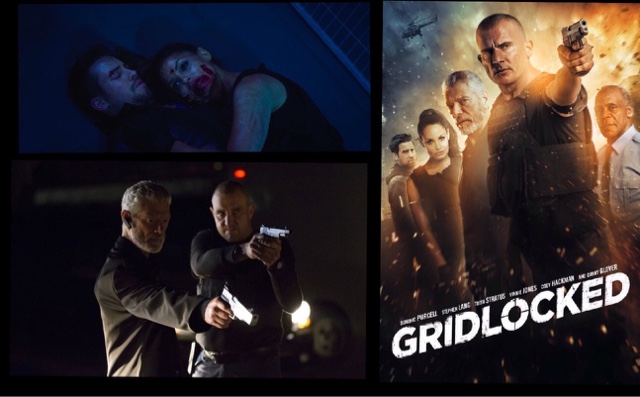