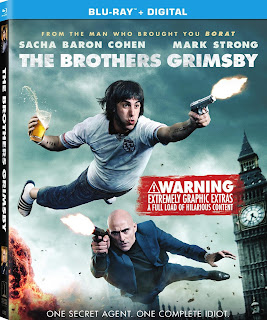 From the creative mind of Sacha Baron Cohen, the comedy mind behind Borat, Bruno, The Dictator comes his most offensive comedy yet The Brothers Grimsby. Think of it as a combination as James Bond meets Shameless, with Jeremy Kyle added just for fun. A movie that could have been a decent action comedy, it it wasn't trying so hard to offend. Do we really want to see a man sucking another man's balls, do we really want to see a facefull of elephant jizz,well no. Set in the Northern Town of Grimsby,famous for its docks, and especially fish,it is a story of two brothers,who's single parent dies suddenly,leaving both in care with social services. When it turns out a family has been found to adopt them,the family only want the one child,so Nobby the older brother decides to stay in care,whilst his younger brother Cobby is adopted by a wealthy London Family. Separated for 28 years it is Nobby's mission in life to be reunited with his younger brother.
Now Cobby,Nobby's younger brother,with a new name Sebastian Graves,and a very successful spy working for Mi6, his cover has been blown,and has also been unwantedly found by his football fanatic older brother Nobby,who stopped has also managed to stop Sebastian from eliminating another spy,and causing the death of the Worlds Health Organisation chief Doctor. Leaving both to be hunted by MI6 as potential traitors.The only place to hide is within the town of Grimsby amonst the colourful residents,involving his football fanatic friends,from there we have a globe setting comedy,starting in Grimsby, then Africa,and ending in Chile,with a potential terrorist attack about to happen at the final of the World Cup,with only the two brothers who can stop this attack,if they can only stop arguing with each other.
This film could have been a decent action comedy,because some jokes were funny,and really funny at that,even I was chuckling,the scenes with Nobby (Sacha Baron Cohen) being the standout with him looking like a glam Liam Galagher,who has to liaise with a woman in a green dress,with him choosing the wrong woman,a maid with a green dress as a housekeeper. The toilet scene is very funny  and full of innuendo,with him having an un-flushable poo,and mistaking another spy as a plumber,who coincidentally is the other woman with the green dress,who he should be eliminating.
The rest of the film is just offensive,with set pieces set out to offend,and upset people,the whole Daniel Radcliffe joke about him having HIV is unnecessary,the same joke is repeated later on in the film using this time Presidential hopeful Donald Trump,using the same joke, once again,unneeded and actually stopped this film from having a greater opening,as many cinema chains were afraid to show,In respect of the Trump joke,upsetting the American public,with Sony pictures doing very little to promote this movie,especially in America. With it only getting back $18,000,000 of its original $25,000,000 budget,making this film a complete flop,and being the worst,and least commercially made movie,Sacha Bowen Cohen has written,or starred in,with Bruno being his most successful film.
Another thing that didn't work and I shamed to say Mark Strong, is a great actor,a thespian as sorts, in the fighting scenes,he looks great,looks convincing,but he is not a comedy actor,and his performance in this shows,as being wooden,and looking like he cannot be bothered,and almost contractually tied into this mess of a movie. With other great British actors,so criminally wasted such as Jonny Vegas, and Ricky Thomlinson,who are normally great comedy actors that are not used, too make this film remotely funnier.
It is In the end it is a mess of a movie,that should have been funny,but in the end made to be so offensive,with the whole underclass joke wearing thin within the opening minutes,with Sacha Baron Cohen's character being a deliberate mick take on Liam Galagher. We have a film that is only mildly funny,with a great director involved,but still managed to ruin the great action set pieces by Louis Leterrier, of Transporter fame,and Unleashed,by a crap offensive script, by Cohen.
Maybe they should have learnt lessons from Judd Apatow, who's Spy is a far more superior comedy action film,with Mellisa MacCarthy,and Jason Statham, being far better at comedy,than Cohen and Strong could ever be.
A disappointment of a movie,with his previous efforts of Borat and Bruno,being far superior comedy movies,and like the stupid storyline in this film with England reaching the final in a World Cup,it is never gonna happen,and this film ain't never going to be a hit neither.
2/5⭐️⭐️ 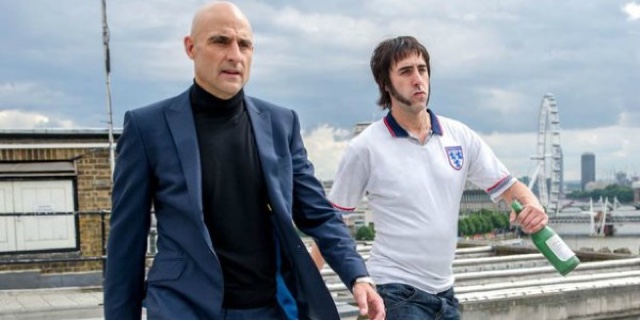