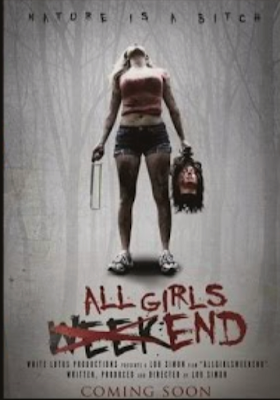 All Girls Weekend, my first thoughts it is going to be a soft core sex comedy in the vain of American Pie, and if you just saw that heading that is the film most would be expecting, not a survival/ slasher movie.
Think of this film as a cross between The Happening,The Decent, and a little Blair Witch thrown in for good measure, a story of four high school friends reuniting many years after graduation.
Where they go off track for a three mile trek in the woods, that takes days,as they get lost, and get taken out one by one by the creepy forest,as mother nature is the serial killer,and requires blood to sustain itself.

This film is a strange one as none of the girls like each other very much, so why would they want to spend a weekend together, in winter, on a team building type thing. So with the girls not being the best of friends and bitching at each other all the time, we have no time to be really empathetic with any of the Characters.
It is obvious who the final girl is going to be.
The thing that got me about this film, with a better cast, bigger budget, it had a decent idea going on, with a cursed forest requiring sacrifices, human ones at that, as humans normally make a terrible job of looking after mother nature. So like the plot in The Happening that most scoffed at, nature is the killer, killing off people in realistic ways.  A girl falls and impales  her leg on a sharp wooden branch, it could happen,and she bleeds to death. Another catches a Cabin in the woods type flesh thing from using a leaf to wipe herself after taking a wee.We have frostbite on fingers as one girl loses her glove, a bear attack, creepy ruins like the Blair Witch, and a girl suffocating from a pile of leaves falling on her. In the end the movie does become preposterous, when the simplicity of the film itself was all it needed to be a creepy little film. The acting is abysmal,with a crappy script, and the constant fade to black of scenes,instead of being edited properly is annoying, so none of this movie flows freely. I will give some kudos to the director, having her own movie poster for this film in the background at the girls house, is a clever Easter egg that most will miss, I didn't, but I thought it was clever.
For a  low budget film, the director has made the forest scenes look very good,and we do have some good cinematography going on,the effects although cheap looking work, it is a shame that better acting could have made this an okay film, with an orginal idea, that very nearly, almost worked, but in the end became a forgettable survival movie.
2/5🌟🌟 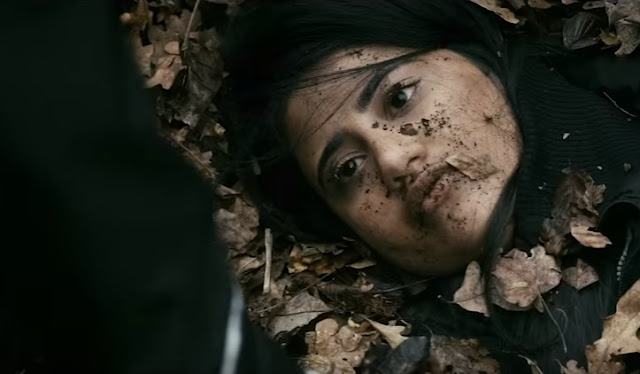