Stone Cold from 1991 making its debut onto DVD and Bluray especially in the UK,is a strange release this week,a super uber-violent film taken straight out of the eighties and represented as a nineties film,we have long hair,mullets,muscles, starring in his motion picture debut Brian Bosworth,an ex professional American Footballer,trying to muscle in literally into the action man market.
Trying And surprisingly failing miserably,to keep up with the new boys, Seagal, Van Damme,Snipes,Brandon Lee,to name a few,with surprisingly Stallone and Schwarzenegger opting for more comedy roles in the early nineties and also failing with classics like Stop Or My Mum Will Shoot,Kindergarten Cop to name a few.
In all fairness this film isn't bad,it stars Lance Heriksen ( 'Chains' Cooper) William Forsythe (Ice) as two of the most over the top bad guys in motion picture history, two leaders of a White Supremacist Biking Gang,known for all types of organised crime,including assassinations,drug dealing,and even governmental change. Long before Sons Of Anarchy was thought of Starring Charlie Hunnam and Ron Pearlman.
Stone Cold directed by Craig R. Baxley a former stuntman,famous for stunts in famous TV shows of the eighties such as Dukes of Hazard and The A Team,with his directorial debut being an episode of the A Team. He later was an assistant director for Predator in the late eighties,and this film being his big screen professional debut. In all fairness this film is not the worst,we had a massive deluge of action drivel in the early nineties,some very good Marked For Death,Universal Soldier,Rapid Fire,some dreadful such as Double Impact,Showdown in Little Tokyo,anything starring Cynthia Rothrock,and Passenger 57. So it was always inevitable that Hollywood was looking out for its new action star,with Horror almost dead in the water,and the new breed of psychological thrillers were the norm for almost a decade,leaving a very profitable action film market to exploit.
Brian Bosworth had it all chiselled looks,a Billy Ray Cyrus Mullet,muscles bigger than Schwarzenegger,but unfortunately couldn't act,and had zero presence onscreen,probably the reason he only really had two film outings this and One Man's Justice or titled in the UK  One Tough Bastard,he is more famous for his commentary work on American Football now thank goodness,than his acting work,it is almost the same though as having Britain's famous footballers such as Gary Neville and Alan Shearer and making them acting stars,it ain't gonna work,so they stick to what they do know and that is football commentary. That is why unfortunately this film Stone Cold has long become forgotten,shame as it had great performances from Forsythe and Henriksen who clearly had a blast making this film,the film is super over the top violent,brilliant if not for the final scenes as Heriksen cuts his hair and pretends to be a Priest,to eventually die in a hail of bullets.
You are not going to be amazed if you have never seen this film,so strange it is being released this week in the UK,but if you see it cheap,which will happen very quickly,or even see on TV give it a go,it ain't bad,just ain't that good either,with dreadful, to brilliant over the top acting that will make you remember how bad the movies were early nineties,and will have you longing for Horror to return once more in 1997 with Scream,and I Know What You Did Last Summer.
2/5⭐️⭐️ 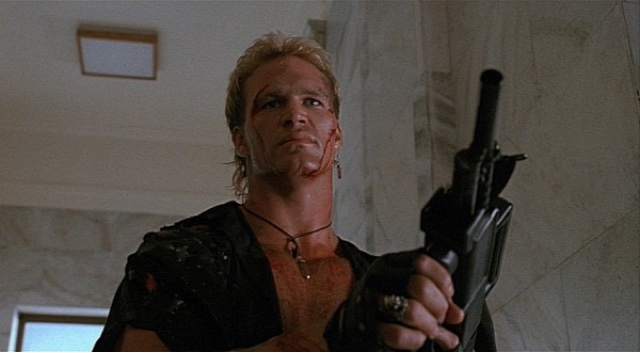