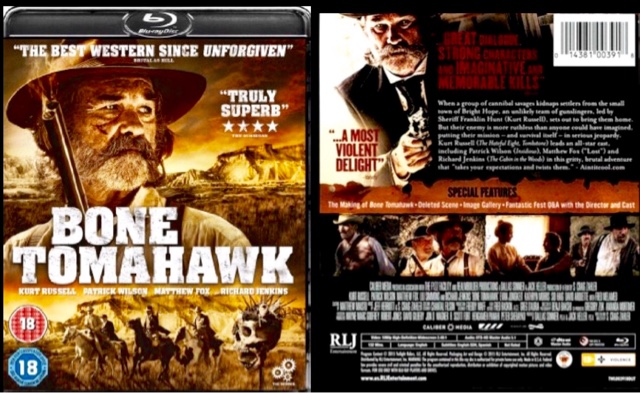 Bone Tomahawk or Tombstone meets The Green Inferno is the third most violent western of the last year, with Salvation, The Hateful Eight and This film,starring Kurt Russell obviously straight out of filming The Hateful Eight,with the beard he had grown,why not make good use of that beard and star in another western. Well is this film any good,well yes as westerns go it is a watchable film,on par with his nineties film Tombstone,not as good as the Hateful Hate,but a million times better than The Green Inferno,starring bloodthirsty cannibals. Yes we have a new genre now Horror westerns,with the British film Blood Moon last year,a werewolf western combo. This film starring Patrick Wilson,Matthew Fox and Richard Jenkins,with in my opinion the two best performances going to Wilson and Jenkins with an unrecognisable Matthew Fox,who plays an arrogant cock of a man,who actually makes the predicament worse for the quartet by being gun happy and shooting two Mexicans, which the rest of their party take revenge and  rob,and steel their horses,making the rest of an already impossible journey harder,as they have to walk on foot. With a five day trek already condensed into three days, to reach the wife of Arthur (Wilson) who has been kidnapped by these bloodthirsty Indian Canibals called troglodytes,savages who live in caves,and live off the living,by ambushing them in the mountain ranges where they torture and kill their victims. They literally strip a man a cut him vertically from his balls through his chest cavity and rip him apart in one gruesome scene,yes you can easily see why this film is an 18 certificate in the UK.
The problem with this film being almost two and a half hours long is it is too slow,and my god I sat through 3 hours of Wyatt Earp with Kevin Costner,and that wasn't as boring as this film with apart from a very gruesome opening,we have zero action till almost the 100 minute mark,condensing all the vilolent scenes into the final 40 minutes of the film. It is a character piece about the bonding of four men on a rescue mission, I get that,but did so much time have to be wasted in the middle third of just four men riding,walking,and annoying each other for almost another 40 minutes.
With scenes early on seemingly not edited well together,with scenes cut badly from one frame to another,hell we don't even see the main character Sheriff Franklin Hunt (Russell) till almost 20 minutes in, with as before mentioned the best character is Arthur played wonderfully by Wilson,who's doctor's wife has been kidnapped,and although crippled himself by an infected broken leg,is determined to rescue his wife,and being the weekest of the bunch turns out to be the strongest and most hardy character of this film. With another scene stealing performance is the elderly deputy played wonderfully by Richard Jenkins. Kurt Russell is good,but I have seen him in better,obviously this was just a tie in movie after the Hateful Eight,and he thought why not use my beard again. Yes this film is violent,but still not the worst I have seen,it was nowhere near as violent or bloody as The Green Inferno,but we had some good gore scenes,with a man's foot being chopped off,decapitaions,throat cutting in the opening scenes,a stomach wound with a whiskey flask pushed into it,and a horrible leg breaking scene.
It is an incredible violent film,but does it make it a good film,well in my opinion no,to be compared to Unforgiven is an insult, Salvation although another slow mover of a film is twice the film this is, Open Range with Kevin Coster and Robert Duvall is another example of how a western should be,this film seemed to be an excuse for excessive violence,with very little else to offer except a boring ninety minutes of nothing happening at all. With the only real joy is the opening scenes although once more disturbing we have a lovely cameo from Sid Haig,and David Arquette as two useless goons,who rob people whilst they sleep,and cut their throats.
This film is not the best,and I'm glad I didn't purchase buy this on a whim,and actually saved myself some money from streaming it instead,the gore scenes are good,the final third is good,but actually there is nothing to really to rave about this movie.yes it is well acted,not the best directed I'm afraid,with an almost zero film score,so silence seems to be the key that does not bond this film together,but makes it even more tension less. Not the best I have seen,not the worst either,just a very average film.
3/5⭐️⭐️⭐️