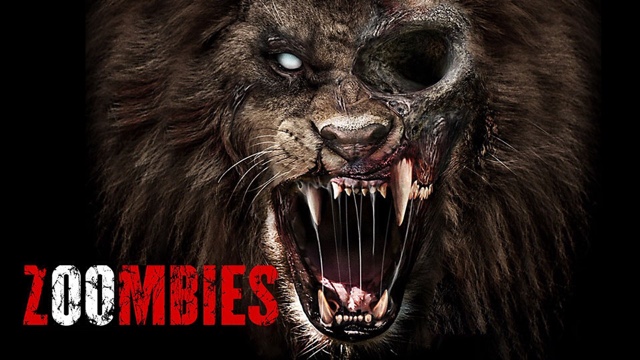 Zoombies or a poor mans Jurrassic World,is surprisingly a fun movie,with shocking acting,dodgy CGI except for the original Capuchin Monkeys,who are actually scarily realistic,and terrifying.  Directed by Glenn Miller the Director of Sharknado 2,Zombie Apocalypse,and Silver Case.
Starting off in the fictional Zoo, called Eden,the only Zoo,to have all the most endangered animals in one place,a haven for nearly all extinct animals,a zoologist dream 50 years in the making,overseeing from his Granddaughters point of view Dr Ellen Rogers ( Kim Nielson) with her cute as a button and extremely annoying daughter Thea (Lala Nestor).
Yes just like in Jurassic World we have a woman in charge of the largest Zoo ever created, with surprisingly very few staff, for a park acres long. We are introduced to a coach full of New interns,ready to be trained up, Gage ( Andrew Asper), A.J (Aaron Groben), Amber (Brianna Chormer),Ricky (Isacc Anderson), and Ty (Reuben Uy) to name a few.

In the first 40 minutes we are introduced to Zombie Monkeys,Wild Zombie Pigs, Zombie Giraffes,Zombie Koala Bear, and Lemurs in trees, with a desperate attempt to not allow the infection into the Avery enclosure, as once the birds have it, and get out, they have a greater chance of spreading the virus.
With stupid plot lines of the CDC ( Centre Of Disease Control) taking hours to get there, with only the swat unit from Ontario  Police force, so I believe this to be a Canadian film, or at least filmed there.

This is a film as stupid as it gets, with stupid characters, with such a dodgy script, and terrible acting with famous lines like "I'm asking for a raise after this" to the worst ever "I can't believe I'm going to say this but shoot to kill" when the animals do not go down one female security guard Lizzy (Lone Butler) actually says " I'm aiming for the Brain"
Afterall this film is still entirely watchable, a so bad it is good, not made to be taking seriously thank goodness, if you like Sharknado, Zombeavers,Lake Placid VS Anaconda you will get this, it is ridiculous, the acting is atrocious, netherless still a fun movie.
3/5☆☆☆