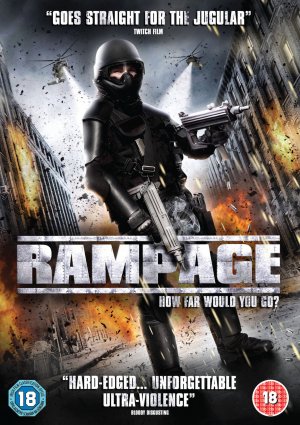 This is strange for me to say this a film that is actually good from director Uwe Boll, although completely controversial, and a vile concept, of a shooting spree of innocent people, that isn't even terrorist related. Just the work of a deranged man, who believes he is saving the human race, from over population,as he honestly believes that the world cannot sustain the 7 million new births per year. And the way to solve this is through unnatural cleansing. Meet Bill,who surprisingly is likeable,polite,and almost too nice to be capable of the atrocities he commits later on in this film,he has a job,still lives with his parents,likes to keep fit and work out,has a best friend who seems more deranged,with YouTube rants about the same ideals,such as radical ideas as why give people who are ill drugs,just let them die,don't give to poor people let them die also,to help with the sustainability of the Earth.

This film is not what I expected,I thought it was going to be a more violent Falling Down, with a scene in a coffee house, with the barista getting the order wrong, and Bill asking for a refund, and being refused, to a woman in a fast food joint dropping a salad on him,and at that stage being awfully polite to her. Little do we know he has been planning this masacre for months, hoarding weapons, and ammunition for this day of madness,and in all fairness we have little,to no reason why he really wants to commit this Masacre. As we have no build up to his anger about the world,we just see a normal looking young man the same as you or me. That is why is film is so hard hitting and shocking,at least if people annoyed him,we could almost reason why he did the things he does,but he is incredibly nice to everyone.

This film has the most honest of dialogue between actors,even hinted that the acting was improvised,with genuine moments of discussion,in true conversation,people talking over each other,like what happens in real life,instead of waiting for the other person to Finnish,like in all normal scripts. With parents talking to their son,whilst he is talking over them,with both parents butting in,and over ruling the conversation. The acting looks real,almost with a documentary feel to it,almost like someone is standing there filming for a reality show. This part of the film is brilliant,and if it was scripted,well done Uwe Boll,for creating a genuine normal script,that looks like just normal conversation between normal adults.

This film is surprisingly good,with great acting especially from Brendan Fletcher as Bill Williamson,although the content,and violence is sickening,and if you watch this film to get enjoyment out of it,well my friends you are a little sick yourselves. It is horribly realistic,and a horrible concept that if you were caught in that situation,you would have little or no chance of survival,with thousands of rounds of bullets being fired into random people on streets,and in shops and restaurants,with the most shocking scene at a beauty salon,where he walks in,takes off his helmet to have a drink of water,even talking calmly to the women,then getting up to leave,he walks out of the shop,to only stroll back in knowing the women has seen his face,so he shoots everyone one in a bloodbath of bullets.To the random woman cornered in a shop front,when he runs out of ammo he say to her "its crazy shit ain't it" before reloading and blasting her away. With so many shootings that happen in America frequently,and even more so in Europe in Brussels and France recently is why this film is even more relevant,and shocking that this threat could actually happen anywhere.A truly horrific film,far too realistic, with the ease of the availability of weapons especially in the US, and even lapse border controls in Europe, we have a film that realistically could happen anywhere, a horrible notion on the human race,that someone out there, is possibly capable of carrying out this form of atrocity.
4/5⭐️⭐️⭐️⭐️