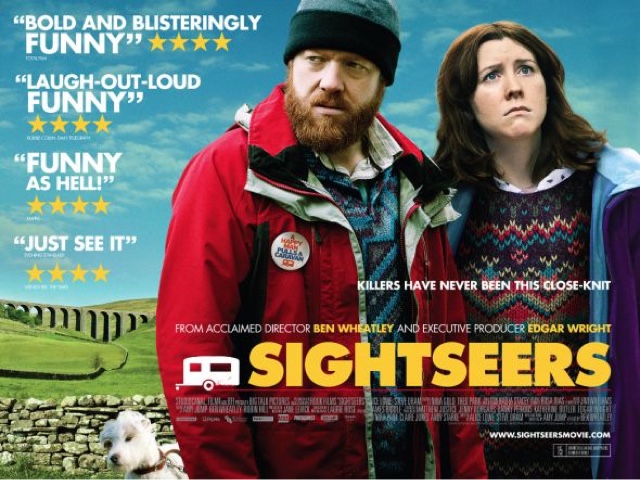 You know the one thing that annoys me living in the UK,being a small Island,and not the mammoth of film production like Hollywood,that every now and then a film comes out,and we have on the poster or DVD cover "The best British film Made" " The funniest film since Shawn Of The Dead". For a decade in the nineties we had every film made compared to bloody Four Weddings And A Funeral. The fact yes we do make 'some' good films,but a lot like Hollywood we produce a lot of shit also.
I saw this trailer a few years ago, directed by Ben Wheatley the director of Kill List,and produced by Shawn Of The Dead's Edgar Wright,and I thought "mmmmmmm okay" a dark comedy,well this film is clearly not as funny,or clever as it thinks it is.
Infact a film that is so tediously annoying,with two of the most benign characters I have ever seen onscreen,and yes I get the irony that they are made that way,taking the piss out of trainspotters and ramblers,taking a pop at people in society with zero personalities. I cannot describe how this film is so annoying. It felt like a cancerous growth growing on me,and by the sixty minute mark I almost gave up. If I have to hear that fookin voice of that woman one more time "Chris, Chris" oh my god I might jump off that viaduct at the end of this film myself.
I'll put this right I live within a ten mile radius of where these people from this film come from, Birmingham or "Brumies" and I have tried my very hardest to lose my accent, I really cannot put my finger on why I hated this film was it that blooming accent that got to me,or was it the fact that these two people,were just so devoid of personality. I do get the message that everyday life put strains on you,and yes you do sometimes want to beat that man senseless because he dropped litter,or that posh bloke who is talking down to you,and you wished you could shove that Daily Mail up his arse,but we never actually do this. I actually think the film is insulting to almost suggest that some people have no moral compass,and even when murder has been committed,you would stand by and some how rationalize your way around it. A film that even it starred Simon Pegg,Nick Frost, or even the talented Catherine Tate,would not have worked,as the film,even being a dark comedy film,needs to at least have some likeable characters in,so even the worst things we see onscreen we can almost forgive them for. This film had none of that charm,it is neither funny,witty,not even a comedy horror like it is marketed to be,with two of the most annoying performances from the two actors involved,who coincidentally wrote this screenplay. It really is in my opinion a one star movie, upgraded to two for one reason the only funny quote in this film "he isn't human, he's a Daily Mail reader"
A dreadful excuse at comedy,even a dark one at that,one that I cannot recommend.
2/5⭐️⭐️