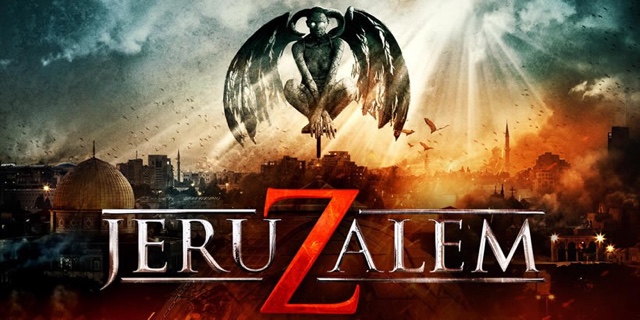 We are told there are three gates to Hell one in the desert,one in the ocean,and one in Jerusalem,with the latter because of the Relgious division between three religions. With a lost footage tape beginning of three church leaders from all three faiths,trying an exorcism of a recently deceased woman,who has risen from the grave with Demon like qualities,with her then execution. We then cut to 40 years later with two Jewish girls Rachel (Yael Groblas) and Sarah (Danielle Jadelyn) going to Isreal on a pilgrimage,to get back to thier Jewish routes,and for Sarah to get over the death of her older brother who died a few months earlier.
This strangely is literally a film of two halves,with the first part working better than the second,with a detour from Tel Aviv to Jerusalem with Sarah taking a liking to an archeologist Kevin (Yon Tumarkin)who is doing resaearch in the Holy City.
This part of the film works with it being told from the one girls perspective wearing Google glasses,the friendship with this guy,the tours around Jerusalem,seeing all the tourist things,such as the Wailing  Wall,and Rachel's relationship with a local Muslim man Omar (Tom Graziani).
I liked this part as we are told so much in the media of the hatred between Jews and Muslims,they cannot live alongside each other,which is completely false,as shown in this,that they do live alongside each other in the same city,with little hatred between the faiths,and that is what I liked about the opening part,yes it was slow moving,but was genuinely an interesting look at cultures and joint history.

Then the Horror part of the film starts,a little like Cloverfield with explosions in the distance with airplanes  bombing certain areas,and the sound of sparodic gunfire,we are still unsure what is happening at this point apart from two Israli soldiers telling the tourists they have to follow them for safety.
It turns out the Z in the title meaning Zombie,or Demon Zombie,when bitten by one you turn into this winged creature thirsty for blood. Which in fairness was done so much better in the Spanish REC series,about a demonic outbreak. With an actress who was so likeable in the first half ,Danielle Jadelyn becoming just an annoying screaming banshee, constantly hysterically crying,saying F**k a lot,and really a reason to turn off this film. We have plot lines completely ignored such as a glimpse of a huge Demonic creature walking along,like the creature in This Is The End film,which shown once then never again,it is hinted the gateway to Hell has opened,and it is judgement day,with Hell on Earth,but we are not shown clearly enough, I get this for budget restraints,but we are just shown a few survivors in the end running down narrow streets,that turn to dark narrow corridors,with every horror cliches jumping out on them in the darkness.

This is such an annoying prospect for this film that's starts so promising,with genuinely likeable characters,that is so ruined by the so called horror aspect of the film later on,and if I see the word Fatal Error appear onscreen one more time I'm likely to do something I will regret,with a brilliant for and against campaign for Google Glass,that surprisingly can get mobile reception and instantly connect to any WIFI network. When  even in my own house certain rooms drop out,with zero connection,and my wife standing on tip toe to send a text whilst balancing on the sofa on one leg,as our mobile network connection is also sometimes crap in the house. Yes I was glad for this movie to end,and even then so poorly, with an instant WTF ending,that certainly wasn't worth the wait for,a terrible film in the end with a been there done that before formula,by other films sooo much better,a straight to DVD film that in no way deserves a cinema release,a film that without the stupid horror element to it could have just worked,as the City scenes are breathtaking,with warm locals of all faiths living in one city,the horror element was just plain stupid,with annoying screaming characters,that I loved in the first half,but couldn't wait to see turning into the undead Later on in this mess of a film,one certainly to avoid.
2/5⭐️⭐️