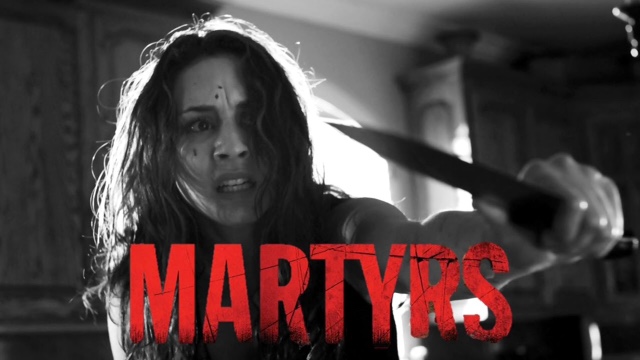 A film to say I thought was good, and being controversial for saying so I preferred this to the original version. With it being condemned already for daring to be made,a film regardless should be seen,at least if you have seen the original.
Condemnation has cometh of this film for being a carbon copy of the original,and yes in places it is,with the shooting of the family being identical. There are however creative differences.
More time is spent with Anna and Lucy's friendship as children,less time is spent on the abuse side of Lucy,which as the younger girl,we really didn't have to see that abuse and violence,to someone so young,in the 2008 original.

Lucy,and this is a plot spoiler,does not commit suicide in this version,and is the final girl as a Martyr and not Anna like in the original. I preferred the actress in this version of Lucy,still haunted,equally dangerous,but not as psychopathic as the original actress.
Although the actress who plays Anna in this film is weaker.
The final third of this is not as bleak and prolonged as the original,with less violence of torture,and prolonged beatings. Still the flaying scene is still in,and is actually more graphic,seeing a whole length of flesh being removed from her back. We have a scene with a teenage girl set on fire.which is totally not needed,but put in instead of the horrific beatings we saw in the original one.

With as I said earlier more time spent with the friendship of Anna and Lucy,both as children and adults,gives this film a more believable friendship between the two,and the reason why Anna goes along with Lucy's quite rightly revenge.
Less time is spent on the abuse of Lucy,as a child and an adult,which in a way I preferred,as far too much was shown in the original,where turning the camera away once in a while,and using sound would have equally the same impact.

The monster scenes,the manifesto of guilt from Lucy's past,for surviving is not as scary,and relentless in this version,with a blatant rip off scene from the film The Grudge,with the hand coming out of the hair,in one scene,still we have less fade to black edits in this movie,and it does flow better than the original,and actually doesn't feel like two separate movies.

Yeah this film is far from perfect and will clearly upset the die hard fans of the original movie,but it isn't terribly bad either,and is better than most of the other poor remakes we have seen of late. I know Hollywood has a habit of letting down fans,especially of former classic foreign film remakes,but this is genuinely not a bad movie.and does have a right to have been made,and a right to be seen.
3/5☆☆☆