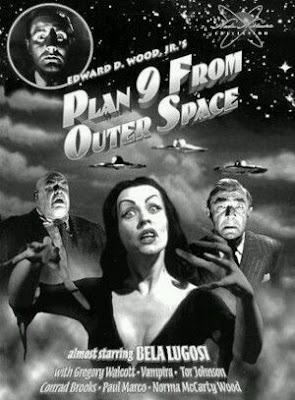 Whilst having a bit of fun on my blog for a few days,I watched this last night,and you know it isn't as dreadful as people make it out to be. I saw Ed Wood in the nineties,about mainly the making of this film,and the directors friendship at the time with Bela Lugosi.

With Edward Wood filming many different scenes with Mr Lugosi,in the hope of making a film,about Grave diggers,with his untimely death in 1956,Ed,had already started work on this project,so what does a director do,he had a look alike to film,and finish  scenes,which he was condemned for at the time,but hold on a minute,didn't they do that with The Crow 1993,and Fast and Furious 7 in 2014.

This has been ridiculed for continuity errors in many scenes,and shoddy special effects,using wheel hubs as flying saucers,attached to strings,and airplane pilots,sitting in normal chairs,but after doing some research last night,the film was filmed to be in a Widescreen format,which would have hidden most of the wires,but then being squeezed into pan and scan format,showed all the floors in this film.

A story about an Alien Invasion,of sorts,but is really a message about mankind wanting to destroy itself,with the use of Nuclear weapons,and the Alien Beings,trying to warn us to stop,with this film just coming out before the Cold War,maybe Edward Wood wasn't this idiot,people saw him as.

The acting is terrible though,and the included scenes of Bela Lugosi,saying no words,but having to use a voiceover to explain some scenes,is bonkers to say the least,then again if you have footage of one of the worlds most famous horror actors,why not use it.

This film is bad,but in a good way,a film so bad its a good type of movie,with The man Monster Tor Johnson,and Vampira,we have probably the most famous flop of a film,that years have been kind to,with a huge cult following has made it, a classic,a B - Movie at that,but still a fun movie,that now I want a Tee Shirt to Wear.
A movie that is bad,but still watchable, compared to other B-Movies,and other Sci-Fi films made afterwards it isnt as bad if you compare it,and put into context of some other terrible B-Movie excuses, it certainly is not the worst. Go ahead give it a watch.
3/5⭐️⭐️⭐️ 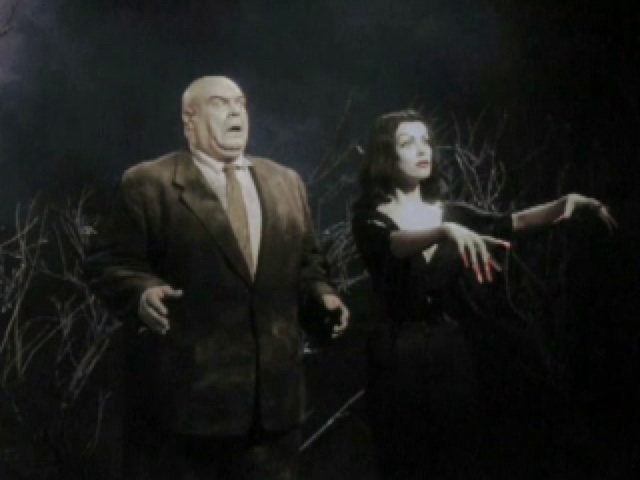