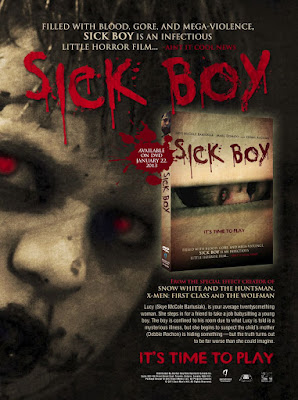 Seeing this film for a few years now on free movie sites,especially Viewster I decided to give it a watch. The thing is it ain't that terrible. With a been there,done that type of horror,which goes in the end into Zombie territory,we have a film that offers nothing new. But plaudits has to go to director Tim T. Cunningham,for directing on a tiny budget of $50,000,and in just 13 weeks of filming,losing the final set location,meaning no re-shoots ,with some continuity errors.
The one thing that did strike me,was the very human script,yes a lot has said the film is boring,and has  serious plotting issues, that do plod along. The scenes between the character Lucy and her fiance were very genuine moments of conversation though,such as petty arguments about money,not going to bed angry,but picking a fight in bed is one of the most common things in a relationship.

Now unfortunately the negative points, the acting to go along this film is terrible,with an actress who is not the best I'm afraid,Skye McCole Bartkowiak,who has to carry 80% of this film is the downside, with her character Lucy not being likeable,or even emotionally caring,is why this film suffers. I can imagine a lot of people switching off early,as before mentioned,she doesn't hold your attention,or even screen time,for you to be remotely bothered what is going on,in this movie,or what could happen later on.

With a House Of The Devil vibe going on,with Lucy being paid a ridiculous amount of money to house sit in,whilst being told a sick child is in the house,but is very ill and contagious,locked in his room from the outside,with very strict instructions not to check on him,disturb him,and whatever happens do not go downstairs where his room is.
With a possible child abuse situation happening,and Lucy not realising this is right until her second night staying in the house,and finally growing a conscience,that locking up a little boy is just not right,then releasing him.

We then have a movie that finally shifts into gear,but unfortunately borrowing from just about every Zombie type cliche movie ever seen,whilst trying so hard to convince you that it is not a Zombie movie,but more about a viral infection,in the vain of 28 Days Later.
This movie is far from terrible,yes the acting is very poor,the very good script,has serious plotting issues ,that should have moved the film on much quicker than it actually does. With nothing happening at all on her first night staying. I thought the idea of any horror film is to create tension,atmosphere which this film fails on all fronts,insisting on throwing everything at you in the final 20 minutes. Such a shame when in places it is a very good script,with very good writing,about normal human interactions.
Maybe the Writer/director should stick to rom-coms or even serious love type films,as he has no idea how to write about horror.
A film that could have been quite decent,with better actors,a bigger budget,and less about character development,and more about horror,it could have been good,but in the end being totally forgettable,when it should have been the other way round totally unforgettable.
2/5⭐️⭐️ 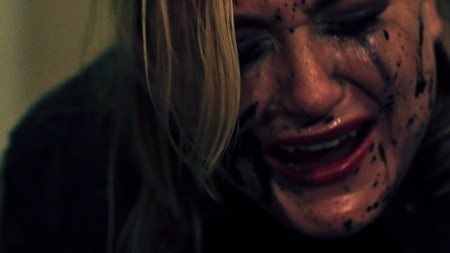