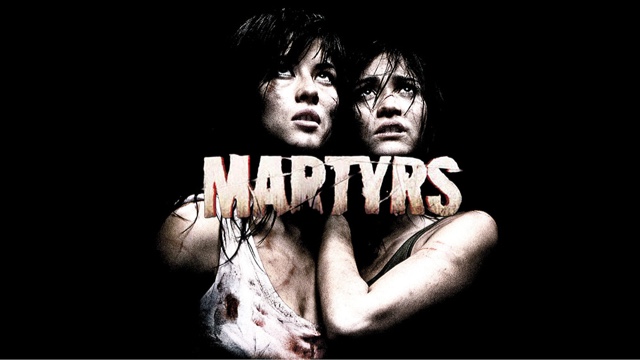 This is a film I have thought long and hard about putting on my blog,only watching this week,with other horror writers praising the film, a film that pushes the boundaries of horror to the limit,and beyond.a film so depraved,you are actually questioning your own reasons,and insanity,for continuing to keep watching.
A film that I'm utterly confused about,on whether it was made to coincide with the recent amount of Tourture  porn Horrors,such as Hostel,the Saw franchise,Switchblade Romance,with a director that decided to up his game,and make a film so utterly disgusting,or whether he was actually making a film about the effects of abuse,especially in children.

As the first part of this film,although graphically violent,actually makes sense,and even the violence used is actually not that over the top,and put in context to what the girl suffered as she was younger,makes sense that the people who abused her needed to die. No they are not Tourtured, and in actual fact are put down relatively humanly,with a powerful shotgun,all would have been dead in an instant,being shot in the chest at point blank range.
It is what this film becomes afterwards,just an excuse to put as many disturbing images on-screen,about brutal torture,abuse,for the titanation of some sick individuals,who I would image probably enjoying this film. To use violence as a way,of almost art,is just plain wrong.

To bring in this amount of suffering,In the hope that the individual crosses over some celestial plane,to enlightenment,to become as the title says a Martyr,is just incredibly horrible. I'm not being a prude either I have seen this type of film done before,but better in the eighties with Hellraiser,about the thin line between pleasure,and pain.
I just couldn't justify watching this film,and giving it a positive review,the acting is incredible from the young female actors,as Children,and the adult actors,are on the top of their game,but that is the only positive I can bring out from this movie. I cannot even say whether it was well directed,as it is just so vile,so depraved,so much seen on-screen,does this make the director a visionary,or just someone deliberately making headlines,by being as controversial as he possibly can be,to test,and play with the censors.

We already have an American remake,that completely surprised people,as the film was out and made,before word had even got out,directed by Kevin Goetz,and his brother Michael Goetz,a watered down version apparently,but why anyone would want to remake this film,is outstanding to say the least.
Still with word that the original director Pascal Laugier,is looking at remaking Hellraiser,I'm not looking forward to that,as Clive Barker's Hellraiser,had the gore,to the minimum,with you having to use your imagination,how much suffering is seen on screen. If Pascal gets his wish,I dread to imagine how horrible,and violent, Hellraiser could be.

Martyrs is a fantasticly acted film,but unfortunately that is the only positive I can give this film, it should be on that reason alone an easy 4 star film,but with it being absolutely horrendous,and blatantly vile,I can only give this a very generous 2/5⭐️⭐️