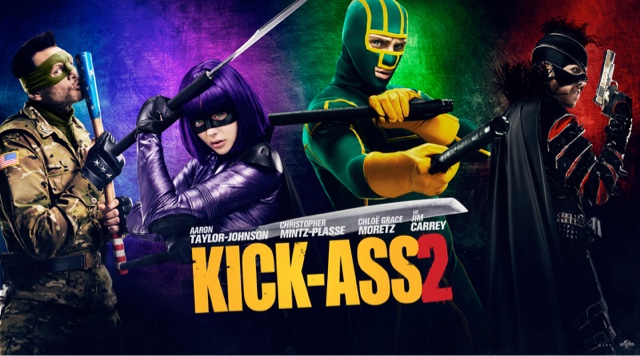 I will be the first to admit I didn't like this movie on the first viewing,it was such a disappointment,compared to the original,but it is a movie that actually gets better with subsequent viewings.
It is actually hard to pick a favourite character,yes Chole Grace Moretz,is still obviously the best,but the finest acting,and easily the star of this movie,is incredibly Jim Carrey,who is almost unrecognisable in this role,a role that he refused,afterwards to promote,or take part in,as he is an anti-gun campaigner,and after the Sandy Hook shootings,he removed all ties to this movie.
Such a shame as this is easily his finest role,and best since The Truman Show,surely he must have read the script,and realised how violent it is,my goodness he is playing a vigilante.With more screen time to Christopher Mintz-Plasse as (The Mother F@@ker)  who is determined to bring down Kick-Ass,with his bunch of hired muscle,including the woman monster,Mother Russia.
This film I will admit is incredibly violent,upping the stakes to treble the violence,and blood on screen than the previous film,with disappointingly less screen time to Hit Girl,the reason this film failed,whilst the first succeeded.
It is a film that has been harshly criticised,yes I get it isn't the same as the first movie,and sequels genuinely get slated for being too like the original film,or if dared to try something away from the formula,the same criticism. I wasn't sure whether I liked this movie, I have watched it now numerous times,and you know it does get better on every viewing.
Chole Grace Moretz is still without doubt the star of this film,a brilliantly talented young actress,who is incredibly pretty,but continues to choose her roles very wisely,Arron Taylor-Johnson is okay,but still his best role to date is Nowhere Boy,Christopher Mintz-Plasse is having the time of his life in this greater role,and I'm also glad the Rape scene in which he should of starred in,was cut from the movie,which features heavily in the graphic novel,and the scene is toned down,and more to a comic level,with him unable to have an erection,whilst assaulting Night Bitch.
It is not quite up there with the previous movie,but you know, I do like it now,they have tried to include more violence to hide the fact that Hit Girl takes a smaller role in this movie,but the star easily of this movie goes to Mr Jim Carrey as Col. Stars and Stripes,shame he wants no credit for this movie,as it is actually Infact his best role to date.
A very violent 3/5⭐️⭐️⭐️