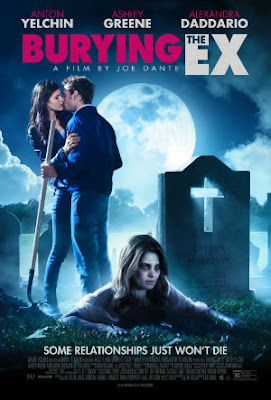 After the disappointment that was Life After Beth,we have this,which is in all fairness is twice the film the previous was.
Yes we have a Zombie comedy,that is actually funny,and witty,directed by Gremlins,and Inner Space,genius Joe Dante. Who is not unfamiliar to horror,directing,apart from American Werewolf In London,the second best Werewolf film,The Howling,starring Dee Wallis.

The simplicity of this film is why it works,Ashley Green,is amazing as the ex,decaying in front of Max, and wanting him dead,so they can live on as the perfect zombie couple.Max certainly wanting to live,but still unable to break Evelyn's heart,employs the help of his waster of a brother,to finish off Evelyn,with hilarious results.

I'm a big fan of Anton Yelchin,ever since I watched Odd Thomas,and although the film was not very good,he was actually the best thing, in the Fright Night reboot.
Yes this is a Zom/com,more romance,and comedy than blood and horror,but it is still enjoyable.
It is certainly not the funniest Zombie movie I have seen,but you know it is okay,with some scary scenes put in,proving Joe can still get the comedy horror ratio right.
Not perfect,by still decent. 3/5⭐️⭐️⭐️