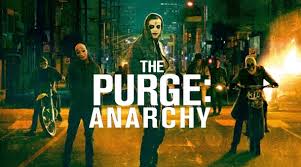 The sequel to the 2013 film The Purge, this time we have the setting on the streets,which the first one should have been set. We have three interweaving stories,merging into one, a vigilante wanting to kill the drink driver who killed his daughter, two sisters surviving a purge attack from their landlord,who is determined to clear out the tenants,and finally a couple who's car breaks down,at the edge of the city,an hour before the Purge starts.
This film is certainly a hell of a lot darker than the first,with more bloodshed,and is actually more sicker than the previous one. We have gangs of purgers,who hunt people down,secret organisations of the most affluent in society,who Purge on the weekest,and poorest in society,in secret.
With the most horrible of situations with truckloads of government agents,who purge all the Towerblocks,as the four fathers are not happy that enough people are being killed year on year.
This is the film the first of the franchise should have been,to show the true nature what the Purge is really about,with a higher body count,a film that shows the true nature of some people,and also the good,and decency in others.
Although it has its plus points,the whole idea of the film,is still a horrible one,that shows probably just too much violence in this film. It doesn't have the same cast as the first one,and not quite as well acted,a film in a way trying just too hard to put all the wrongs in the first film right.
Netherless it is still a film that has actually done well at the box office,and a film that has produced another sequel called The Purge Election year,which will be an interesting idea as a politician is actually caught up in the Purge,and will see for herself the horrible law she and others have created,first hand.
This film though is still a half decent effort,it shows the true nature of the Purge, at first hand,but in a way tries to show way too much,it is a lot sicker than the previous film and for that reason I have too drop a star.
3/5⭐️⭐️⭐️